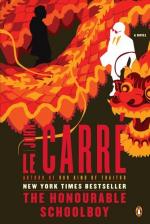 This detailed literature summary also contains Topics for Discussion and a Free Quiz on The Honourable Schoolboy by John le Carré.

The Honourable Schoolboy is a spy novel by the acclaimed author John Le Carre. In this novel, the Circus, or British Secret Service, is still reeling with knowledge that one of its best and most respected agents was a Russian spy. George Smiley finds himself in the undesirable position of running this demoralized organization and decides his first priority should be to set right some of the damage Bill Haydon did to his beloved service. Smiley searches until he finds a case that has the fingerprints of the Russians all over it. This case follows a string of bank accounts from Vientiane to Hong Kong, taking Smiley's agents all over Southeast Asia in search of the truth. The Honourable Schoolboy is a test of personal integrity as much as a novel about spies, teaching the reader something about human nature as it entertains.

George Smiley has found a case in the Circus's files that has Karla's fingerprints all over it. Smiley calls in the submitting agent, Sam Collins, and asks him to go over the case with him in detail. Collins tells Smiley how he became aware of a bank account receiving questionable sums in the name of a charter company, Indocharter. Collins investigated and found that the charter company was just a front for some illegal businesses. Collins submitted these findings to Haydon only to be told there was not enough information to warrant a full investigation. Shortly afterward, the money disappeared. Working for Indocharter was a young British woman, but Collins is purposely vague about the young woman, leaving Smiley convinced there is more to the girl than Collins is telling.

Smiley sends an agent, Jerry Westerby, to Hong Kong. Once there, Westerby follows up a lead Smiley and his team have discovered. It seems the money Collins was monitoring in Vientiane has reappeared in Hong Kong. Westerby befriends a bank employee and convinces the man to give him a look at the account where this money is being held. Westerby tells Smiley that the account was opened by Drake Ko, the owner of Indocharter, but that the account is actually intended for an unnamed person. Shortly afterward, Westerby meets Ko at the horse races and sees him get into a car with an attractive British woman. Smiley pairs this information with what Collins has told him and decides to investigate the young woman who worked for Indocharter. Smiley learns that this young woman, Elizabeth Worthington, was married and had a small child, but she disappeared more than a year ago. Elizabeth wrote letters to her father, claiming to be working for the British Secret Service. Smiley soon learns that the name of Ko's companion is Liese Worth, a pseudonym for Elizabeth Worthington.

Jerry is assigned to meet Elizabeth and attempt to get information from her in regards to her time in Vientiane. Smiley believes a pilot Elizabeth was involved with is somehow connected to the gold seam, especially after the Cousins tell Smiley that the pilot, who was believed to have died in a plane crash, is still alive. Jerry takes Elizabeth to dinner and gets her to tell him all about the pilot, Ricardo, and their friend, Charlie Marshall. Jerry is then sent to track down Charlie Marshall, which he does, learning that Charlie was offered a dangerous flight by one of Drake Ko's men but turned it down. Instead, Charlie suggested Drake offer the job to Ricardo. Jerry is then sent to speak to Ricardo. Jerry finds Ricardo isolated and wary of talking to anyone but manages to convince him to share his story. Ricardo tells Jerry how Drake Ko's man hired him to fly drugs into China and bring out a special package. However, Ricardo did not want to get caught with drugs in China because he knew jails in China are worse than death. Ricardo landed the plane and hid for a time before selling the drugs to an American drug enforcement agent.

Ricardo's life was in danger for failing to commit his mission, so Elizabeth went to Hong Kong to convince Drake Ko to allow Ricardo to live. Despite Elizabeth's pleas on his behalf, Ricardo is still overly cautious with his own life. To this end, Ricardo places a grenade in Jerry's car, hoping to keep the story secret. However, Jerry figures out Ricardo's plan and is able to escape the car before it explodes. Jerry goes to an American military base where he is given orders to return to England. Instead, Jerry returns to Hong Kong to save Elizabeth, who he believes has no idea how dangerous the people around her are. It is Jerry, however, who finds that he does not know how dangerous this case has become. Jerry sneaks Elizabeth out of her Hong Kong apartment after a bitter confrontation with Smiley. Jerry then has Elizabeth take him to a place Drake Ko once showed her, believing that this is where Drake will bring his brother when he helps him escape China.

Jerry sends Elizabeth back to Hong Kong and then lays in wait for Drake. Drake arrives in the dark, waiting on the beach for his brother's arrival. Jerry approaches Drake and tries to warn him that the Circus knows about his plan to rescue his brother, but Jerry is too late. Nelson arrives. As the two brothers are locked in an embrace, the Cousins rush in. Jerry is killed and Nelson is taken away. The Americans take credit for the entire case. Smiley is replaced as head of the service.