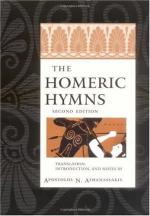 This detailed literature summary also contains Topics for Discussion and a Free Quiz on The Homeric Hymns by Andrew Lang.

This collection of spiritually oriented poems, written in praise of the Classical Greek gods, came into existence over a period of time thousands of years in the past, and provides the clearest base understanding of Classical Greek theosophy available. While repeated scholarship over the centuries has never specifically defined the authors of each poem, and while several translations of the poems have been published without defining a standard order, their central thematic intentions have remained consistently apparent. These are to remind those who hear them of the presence and power of the gods, and to explore the relationship between the gods and humanity.

This collection consists of several poems written in praise of the Classical Greek gods. They are, in fact, poems of praise, glorification, and invocation - many of them, in fact, end with a request for blessing from the god they address. This is the reason that they have earned the designation of "hymn."

There are several hymns of considerable length in the collection. "The Hymn to Demeter" recounts the story of the earth/mother goddess Demeter's obsessed search for her kidnapped daughter, how she neglected the earth as a result of her obsession, and how her joy when her daughter was returned to her brought life back to what her abandonment had left barren. This is an example of one of the fundamental purposes of myth - to explain why things in the world are the way they are. Meanwhile, "The Hymn to Aphrodite" tells of the love goddess's romantic (sexual?) obsession with a mortal, the lengths to which she went to enable their sexual union, and the powerful control she exerted over him once that union had been consummated. This is an example of another of the fundamental purposes of myth - to illuminate the human condition, to illustrate how universal human experiences (i.e., of feeling) actually are by attributing them to the gods. In other words, as the gods are so are humans - and as humans are, so are the gods.

A third long hymn, "The Hymn to Pythian Apollo," narrates the story of how the sun god essentially kidnapped the crew of a sailing ship and commanded them to serve as the guardians of one of his temples. The point here is to remind those who hear the poem of the omnipotent, sometimes selfish, often capricious power of the gods. Yet another hymn of notable length is "The Hymn to Hermes" which, in its narration of the origins of the god who has come to be known as "The Trickster God", performs yet another core function of myth - to explain the origin of an object or tradition. In this case, the object in question is the lyre, one of the most popular musical instruments of the Ancient World.

There are also several shorter hymns to a wide range of deities - the war gods Ares and Athena, the moon goddess Artemis, the hearth goddess Hestia, and the god of wine and revelry, Dionysus. All these poems celebrate the gods' powers and invoke their blessing.

There is only one hymn each in honor of Zeus, the king of the gods, and of Hera, his wife. Both are relatively short, and lack the detail and scope of the longer hymns (and even of some of the shorter ones). However, both Zeus and Hera appear frequently as figures in the other hymns, all of which are essentially narrative (ie storytelling) in their structural character. In other words, Zeus and Hera are powerful, motivating and defining characters in the narratives of the other gods. This suggests that even the gods are subject to the will of powers greater than their own, a situation that is itself is a manifestation of one of the collection's central thematic statements, and perhaps one of the key purposes of any hymn, Ancient or otherwise. This is the premise that the nature of existence is defined and determined by greater spiritual and/or moral authority.