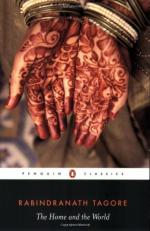 The Home and the World Summary & Study Guide

Rabindranath Tagore
This Study Guide consists of approximately 47 pages of chapter summaries, quotes, character analysis, themes, and more - everything you need to sharpen your knowledge of The Home and the World.

The Home and the World Summary & Study Guide Description

The Home and the World Summary & Study Guide includes comprehensive information and analysis to help you understand the book. This study guide contains the following sections:

This detailed literature summary also contains Topics for Discussion on The Home and the World by Rabindranath Tagore.

The Home and the World by Rabindranath Tagore is an interesting allegory of Indian politics in the early twentieth century. As a means of encouraging his wife, Bimala, to emerge into the outer world, Nikhil introduces her to Sandip, an active leader in the Swadeshi movement. Bimala soon becomes immersed in the revolutionary fervour of Swadeshi and finds herself torn between the duties of home and the world. The Home and the World is a tragic example of the conflict between realism and idealism.

Though Nikhil and Bimala enjoy a peaceful marriage, Nikhil wants her to enter the outer world, believing their love is true only if they recognize one another in the outer world. When Bimala attends a Swadeshi rally led by Sandip Babu, she insists he visit Nikhil's estate. Bimala and Sandip are attracted to one another, so Sandip decides to make his headquarters at the estate.

Bimala becomes intimately involved with the Swadeshi movement because of her desire to work with Sandip. Sandip is obviously interested in Bimala, and Bimala begins to question her marriage to Nikhil because Sandip represents everything she wants in a man. At Sandip's request, Bimala steals 6000 rupees from Nikhil's safe for the Cause, but Sandip's subsequent behavior makes her feel torn as though she is two people, one who is appalled by Sandip and one who is attracted to him.

Though Nikhil is distraught at losing Bimala, he grants her the freedom to choose her own life. Guilt-ridden about her theft, Bimala sends Amulya, a young disciple of Sandip's, to sell her jewels so she can replace the 6000 rupees, but instead, Amulya steals the money from Nikhil's treasury. Nikhil forgives Bimala's deceit, causing her to realize her husband is the one who truly loves her. When there is a Swadeshi riot in Bengal, Sandip flees the city while Nikhil goes into town to try to calm matters. Nikhil is shot in the head, and Amulya is killed by a bullet through his heart.

More summaries and resources for teaching or studying The Home and the World.

The Home and the World from BookRags. (c)2022 BookRags, Inc. All rights reserved.