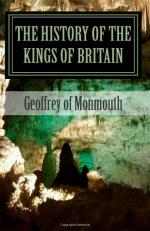 Plot Summary
+Chapters Summary and Analysis
Dedication and Part One: Brutus Occupies the Island of Albion
Part Two: Before the Romans Came
Part Three: The Coming of the Romans
Part Four: The House of Constantine
Part Five: The Prophecies of Merlin
Part Six: The House of Constantine (continued)
Part Seven: Arthur of Britain
Part Eight: The Saxon Domination
Free Quiz
Characters
Objects/Places
Themes
Style
Quotes
Topics for Discussion
Order our The History of the Kings of Britain Study Guide

The History of the Kings of Britain Summary & Study Guide

Geoffrey of Monmouth
This Study Guide consists of approximately 47 pages of chapter summaries, quotes, character analysis, themes, and more - everything you need to sharpen your knowledge of The History of the Kings of Britain.

The History of the Kings of Britain Summary & Study Guide Description

The History of the Kings of Britain Summary & Study Guide includes comprehensive information and analysis to help you understand the book. This study guide contains the following sections:

This detailed literature summary also contains Topics for Discussion and a Free Quiz on The History of the Kings of Britain by Geoffrey of Monmouth.

In The History of the Kings of Britain, Geoffrey of Monmouth proposes to set forth the history of the British kings starting with Brutus and ending with Cadwallo. Geoffrey undertakes this endeavor at the request of the Archdeacon of Oxford who presents Geoffry with an ancient text to translate from British into Latin. The history of the British kings shows how fortune, jealousy, and betrayal can lead to the demise of an entire nation. On the other hand the text also details the qualities that are necessary in a good ruler who unites his people in peace. While Geoffrey's account reads like a novel, the basis for the book is historical and gives the reader a generalized view of British history.

Britain's history begins with Brutus, an exiled Trojan accused of killing both his mother and father. During his time in exile, Brutus frees enslaved Trojans and secures ships to sail the seas in search of a new home. Brutus' travels finally bring him to an island formerly inhabited by giants and he names it Britain after himself. Brutus quickly sets about establishing cities, appointing dukes and earls, and building a capital city. While Brutus battles his share of enemies, the majority of his reign is lived out in peace and prosperity. After Brutus come a series of kings who alternately raze Britain and then raise it back up again. There are many kings who are so horrible that their crimes are unimaginable.

As the story evolves the reader begins to see patterns. An excellent ruler possesses certain characteristics including military skill, a strong sense of justice fueled by love of his country, and generosity. These kings are loyal to their countrymen and seek to expel all foreign invaders. They foster civic works that increase national pride and provide for the welfare of their constituents. On the other hand are the kings who are motivated out of personal greed or jealousy. While the righteous rulers work diligently to build their kingdom up, the immoral can very quickly decimate the entire nation. Dunvallo Molmutius spends his forty year reign working to establish laws that keep the island free of thieves and offers sanctuary to those in need. When Dunvallo dies his sons take over the kingdom and immediately engage in a battle over which one should assume the throne. Their battle brings foreigners back to the island and opens the door to the ruin of all that their father worked so hard to build.

Geoffrey's chronicle tends to speed through the various rulers as he notes their name, the length of their reign and whether they were a good or bad ruler. He may divulge a few extra details regarding any important work the ruler accomplished or if a particular king was exceptionally heinous. Geoffrey does spend considerable time discussing the lives of Brutus, Constantine, and Arthur. The choice of kings to detail is interesting because Arthur is typically considered a legend not a historical figure. However, each of these kings is a prominent example of the values that make an excellent ruler. Geoffrey probably chose these three in order to subtly make a point to his intended benefactor, Alexander, on how to rule effectively. The fact that the book ends with Cadawallader and the deteriorating British nation is another clue that Geoffrey's text is meant to serve a lesson to the current ruler. Geoffrey maintains a relatively light narrative style so as not to openly offend Alexander but the veiled implications are noticeable to the educated reader.

More summaries and resources for teaching or studying The History of the Kings of Britain.

The History of the Kings of Britain from BookRags. (c)2022 BookRags, Inc. All rights reserved.