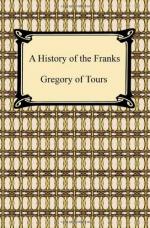 The History of the Franks Setting & Symbolism

This is the location from which the work was written. This is near to Rome, Italy but far enough away from there to be viewed as part of Gaul and as Frankish terrain. During the author's early life, this is definitely part of Gaul, but as the author's death approaches, the author sees how it is going to be come Frankish. This makes the fact that the work is called THE HISTORY OF THE FRANKS and not the history of the Gauls meaningful.

That having been worked out, it now becomes clear that Tours is located in present day France. The success of the Franks having descended to the present day. There dominance in the region has lasted 1500 years.

This is both the name of the city and the seat of the Roman Empire. The Pope is also located in Rome. Rome is significant both religiously...