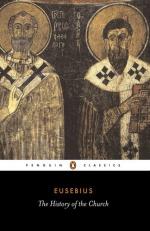 Eusebius of Caesarea
This Study Guide consists of approximately 26 pages of chapter summaries, quotes, character analysis, themes, and more - everything you need to sharpen your knowledge of The History of the Church from Christ to Constantine.

The History of the Church from Christ to Constantine Summary & Study Guide includes comprehensive information and analysis to help you understand the book. This study guide contains the following sections:

This detailed literature summary also contains Topics for Discussion and a Free Quiz on The History of the Church from Christ to Constantine by Eusebius of Caesarea.

The History of the Church was written by Eusebius of Caesarea (263 - 339). The Catholic Church refers to him as the Father of Church History because he is known as one of the most important historians of the Christian Church. The book covers the history of Christianity's first three centuries, from Christ's birth, death and resurrection to Emperor Constantine's legalization of Christianity. Eusebius refers to numerous important documents, monuments, events, acts and extracts. He records lineages of Roman Emperors, and the various key bishoprics in the Christian Church, particularly those in Alexandria, Jerusalem, Antioch and Rome.

Eusebius's goals, however, are not merely to record church history; he aims to record successions of various seats to avoid deceit. He is interested in following the development of church doctrine and the history of heresies in order to preserve the purity of Christian doctrine. Eusebius aims to properly record Jewish history as well and the relationship of the Christian church to the Jews and to "heathens." Finally, he is very concerned not to let the martyrs of the Christian church be forgotten, so he spends ample time recording records of their suffering.

Eusebius's work is composed of ten book. The first book is a detailed introduction to Jesus and his apostles. He is concerned to defend the events of Christ's life as told in the Gospels, which he does by referring to other texts concerning the period. He also argues on behalf of Christ's divinity and records the early travels of the apostles during and following Jesus' death. As further proof, he looks to the Old Testament for proof texts concerning Jesus' divinity. The second book covers the period from Tiberius to Nero, covering the works of the apostles and their martyrdoms. Book three runs from Vespasian to Trajan, discussing the creation of the gospels and the successors to the apostles. He records the first persecutions and discusses early heresies. Book four covers the period from Trajan to Marcus Aurelius, focusing in particular on the bishopric succession lines, the writings of the bishops and further martyrdoms. Book five runs from Marcus Aurelius to Severus, covering much of the same information, but focusing in particular on the heresy of Marcion and the resolution of the Easter Festival dispute.

Book six runs from Severus to Decius, focusing on the life of Origen in detail and recording his contemporaries. The seventh book covers the period of history between Gallus and Gallienus; it focuses on the writings of Cyprian and Dionysius and the important heresies of the day. Book eight covers the period from Diocletian to Maximian, recording the most brutal attacks on Christians up to that time; whereas, the ninth book covers more of the same, particularly Maximin's renewed attacks and the end of his persecution of the church. Book ten records the coming of peace to the Christian church that Constantine gave to them and lauds Constantine for his victories over the tyrants who persecuted them.

More summaries and resources for teaching or studying The History of the Church from Christ to Constantine.

The History of the Church from Christ to Constantine from BookRags. (c)2022 BookRags, Inc. All rights reserved.