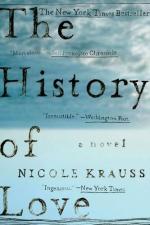 Plot Summary
+Chapters Summary and Analysis
The Last Words on Earth
My Mother's Sadness
Forgive Me
A Joy Forever
My Father's Tent
The Trouble with Thinking
Until the Writing Hand Hurts
Flood
Here We Are Together
Die Laughing
If Not, Not
The Last Page
My Life Underwater
One Nice Thing
The Last Time I Saw You
Would a Lamed Vovnik Do This?
A + L and The Death of Leopold Gursky
Free Quiz
Characters
Objects/Places
Themes
Style
Quotes
Topics for Discussion
Order our The History of Love Study Guide

Related Topics
Great House
To Be a Man

Nicole Krauss
This Study Guide consists of approximately 44 pages of chapter summaries, quotes, character analysis, themes, and more - everything you need to sharpen your knowledge of The History of Love.

The History of Love Summary & Study Guide includes comprehensive information and analysis to help you understand the book. This study guide contains the following sections:

This detailed literature summary also contains Topics for Discussion and a Free Quiz on The History of Love by Nicole Krauss.

The History of Love by Nicole Krauss intertwines romantic and mysterious elements into a story about love, loss, and identity. Structured as a book-within-a-book, the novel explores the impact that one supposedly lost manuscript has on the lives of several people. Through reading the fictional book, also titled The History of Love, the characters begin to define and refine their own personal histories of love.

Leo Gursky makes a point of being seen wherever he goes. He recently responded to an ad for nude models, thinking it would be great to be seen so completely. Leo has written three books. The first was about his hometown in Poland and the second was a fantasy novel. Leo's favorite critic and lover, Alma, did not like either one. His third book was about her. After his heart attack, Leo began to write again. He wrote about a boy who secretly loved a girl. The girl's father sent her to America, and the boy swore he would join her. After World War II ended, the boy, now a man, made it to America and visited the girl. She told him that she assumed that he had been killed in the war, so she married someone else. After seeing a picture of his five-year-old son, Isaac, the man left, never to love another woman. Once Leo finishes the novel, he sends it to Isaac. A few weeks after Leo mails the book, he discovers that Isaac has died. He meets Bernard, Isaac's brother, at the funeral. Leo does not reveal his identity but does say that he is from Slonim. At Bernard's house after the service, he tells Leo that Isaac found some letters written in Yiddish among their mother's things. Isaac believed that the letters were from someone Alma had loved in Slonim, but she never mentioned anyone. Leo returns home from the service and finds an envelope with a copy of his book The History of Love in it. With Bruno's encouragement, Leo goes to Isaac's house in Connecticut to try and retrieve his book, but cannot find it. Several days later, Leo reads an excerpt of his novel, which is being published under Isaac's name, in a magazine. He wonders if Isaac read the book, which would mean he knew Leo was his father. He checks the mail and finds a letter asking him to come to the Central Park zoo on Saturday. It is signed Alma.

Alma Singer is named after a girl in a book called The History of Love. Her younger brother, Bird, is obsessed with Judaism. Their father, David, died when Alma was seven years old. Alma learned from her uncle Julian that David was a great outdoors man, so Alma decided to learn about surviving in the wilderness. She keeps a notebook called How to Survive in the Wild. Charlotte, Alma's mother, shut herself off from the world after David's death. It is only recently that she went back to work as a book translator. One day Charlotte receives a letter from Jacob Marcus requesting that she translate The History of Love, Zvi Litvinoff's only published novel. After Charlotte finishes translating the first quarter of The History of Love, she asks Alma to mail it to Jacob. Thinking Jacob might make a good husband for Charlotte, Alma encloses a secret letter. She tells her Russian friend, Misha Shklovsky, about her family and her letter to Jacob Marcus.

Nearly a month after Alma mails the package to Jacob, he sends a response. Alma reads the letter, but does not feel she knows anything about Jacob. She picks through the letter for clues, then decides to read through The History of Love for more clues. She finds out from Charlotte that the character's full name is Alma Mereminski. Alma discusses her theories about Alma Mereminski's existence at length with Misha, who is skeptical that Alma is actually a real person. Determined to find out for sure, Alma searches several local government offices for records of Alma Mereminski and finally learns that she married Mordecai Moritz. When she goes to find Alma Mereminski, Alma learns that the woman has died, but that her son, Isaac, is a famous writer. She finds a copy of Isaac's novel The Remedy, and discovers that Jacob Marcus was a character in the novel, and the man sending letters to Charlotte is actually Isaac Moritz, Alma Mereminski's son. The next morning, Alma prints a map and directions to Isaac Moritz's house and arranges for Herman Cooper, her neighbor, to drive her there. After a long drive in the rain, Alma and Herman find Isaac's house, but no one is home.

The History of Love was originally published in Spanish by Zvi Litvinoff. The original manuscript was written by Zvi's friend, Leo Gursky, and was given to Zvi for safekeeping during the war. Sixteen years later, Zvi copied Leo's book word for word, except for the names, all but one of which he changed. When The History of Love was about to be published, Zvi turned Leo's self-penned obituary, "The Death of Leopold Gursky", into the book's final chapter as a tribute to his friend. He did not know that Leo was still alive and living in New York. Zvi's wife, Rosa, had encouraged him to publish the book and later found out that Leo was the true author. She arranged to have Leo's original manuscript destroyed when their home flooded.

Upon hearing from Misha that Alma is looking for someone, Bird reads through her notes in How to Survive in the Wild and sees the name Alma Mereminski, then Alma Moritz. The different last names lead Bird to think that David may not have been Alma's father. He finds Alma's copy of The History of Love and reads it as well, thinking it may reveal who Alma's real father is. After talking with Bernard Moritz about the connection between Leopold Gursky, Isaac Moritz and Alma Mereminski, Bird prints out The History of Love and prepares to send it to Leopold Gursky.

Alma receives a letter from Leopold Gursky, asking her to come to the Central Park Zoo. On the appointed day, she arrives at the park but does not see anyone that could be Leo. Finally she sits down next to a man who pays no attention to her. As Leo sits waiting, he thinks about how Alma loved his imagination and how he used his imagination to survive. At this point in his life, Leo cannot tell the different between what is real and what he believes. He pins an index card to his coat, thinking he may die on the bench.

Alma gets up to leave and notices the card on the old man's chest says his name is Leo Gursky. She tells him her name is Alma and he replies that Alma is his favorite name. When she says that she was named after every girl in a book called The History of Love. Leo says he wrote the book. Confused, Alma asks if he is a writer, and Leo says he is, that his books are titled The History of Love and Words for Everything. Alma tells him that The History of Love she is talking about was written in Spanish by Zvi Litvinoff. It occurs to Leo that this Alma may actually be real, and that his book still exists. He looks at her and realizes that she is not his Alma. Alma asks Leo if he was ever in love with a girl named Alma Mereminski and if his son's name was Isaac Moritz. He does not say anything, merely taps her several times. She reaches for his hand, then hugs him. He says her name several times, and she taps him in return.

More summaries and resources for teaching or studying The History of Love.

The History of Love from BookRags. (c)2022 BookRags, Inc. All rights reserved.