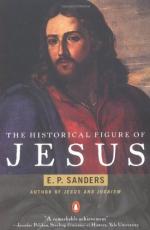 The Historical Figure of Jesus Summary & Study Guide includes comprehensive information and analysis to help you understand the book. This study guide contains the following sections:

This detailed literature summary also contains Topics for Discussion and a Free Quiz on The Historical Figure of Jesus by E. P. Sanders.

"The Historical Figure of Jesus" by E.P. Sanders is an in-depth look at the historical life of Jesus. Over the centuries, there have been many conflicts, in both the historical and theological fields because there is little documented historical information regarding the life and times of Jesus. It is clear to most that the New Testament cannot be considered as an historical document for a number of reasons. These include the fact that the New Testament has much room for interpretation, was written by men many years after Jesus died, and that the book has been altered. All these facts have been proven.

Sanders chooses to look not only at Jesus, but at his surroundings shortly before, during, and after his death. The first century in Galilee and Palestine is quite different than it is today, and Sanders does a good job outlining the Palestinian way of life. This includes the political setting of the region as well as the weather, terrain, and traditions of the people. Sanders asserts that it is necessary to consider all factors when trying to uncover the truth about the Christ.

Sanders is an historian, scholar, and academician. There are few opinions regarding the actual facts, or lack thereof, rather the author tends to focus on casting doubt where doubt should be cast. It is one thing to believe certain stories for belief's sake but another thing entirely if one is expected to take parables and interpretations to heart as historical fact.

Another of the problems surrounding scriptures can be seen in the synoptic gospels. The same events are often told in varying ways by Matthew, Mark and Luke, casting questions on the exact occurrences.

The reader is also introduced to the many laws and customs, some of which support Biblical accounts, while others discount them.

There are sketches of the lives of the Apostles, as well.

Sanders is able to point out little known facts about the length, area and structure of Jesus' ministry. This includes the fact that the disciples were often cared for by prominent female followers as well as the kindness of the villagers while they traveled from place to place spreading the Word of God.

There are insights into the concept of the Kingdom of Heaven, Hell, and the existence of Satan.

The book is a fascinating read for anyone who is interested in history, whether or not he or she is religious, Christian, or interested in theology. One can see the work as a biography, albeit abbreviated when it comes to Jesus himself. Rather, it is a telling picture of Galilee and its peoples and customs.

The Historical Figure of Jesus from BookRags. (c)2022 BookRags, Inc. All rights reserved.