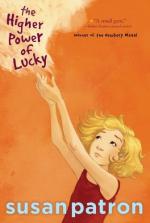 Susan Patron
This Study Guide consists of approximately 35 pages of chapter summaries, quotes, character analysis, themes, and more - everything you need to sharpen your knowledge of The Higher Power of Lucky.

The Higher Power of Lucky Summary & Study Guide includes comprehensive information and analysis to help you understand the book. This study guide contains the following sections:

This detailed literature summary also contains Topics for Discussion on The Higher Power of Lucky by Susan Patron.

"The Higher Power of Lucky," by Susan Patron, is the story of ten-year-old Lucky Trimble who hears a fascinating concept when she eavesdrops on a meeting of members of a twelve-step group. The group is speaking about an elusive mystery called the "Higher Power." Lucky is convinced that once she finds out how to obtain the Higher Power, all her problems will be over.

Lucky's problems are complicated and not the typical ones of a ten-year-old girl. Two years before, Lucky lost her beloved mother, Lucille, when she accidentally stepped on to a power line that had fallen down after a horrific rainstorm. Lucky has never met her father or at least she doesn't think she has. It is a big question mark to her why she has no contact with him. Since she had a close relationship with her mother and no relationship at all with her father - who is still alive - Lucky winds up having a disproportionate anger and misguided resentment against her mother for leaving her. Perhaps her mother really wasn't a very good mother, she muses. After all, she shouldn't have been so careless by going outside after a storm and she shouldn't have married a man who didn't like children.

While Lucky has to struggle with her roller-coaster emotions and must try her best to deal with the adult problems and unexplained events in her life, she fears that she is being faced with yet another abandonment. After her mother died, her father contacted his ex-wife, Brigitte, who lived in France. He was married to Brigitte before he married Lucky's mother but they got divorced because he didn't want any kids and Brigitte did. Lucky's father enlisted Brigitte's help to take care of Lucky. Since he offered to pay her airfare and support her and the child, Brigitte agreed to help him out. She had always wanted to see California anyway.

But time marched on and a suitable foster home could not be found for Lucky. Her father suggested to Brigitte that if she became Lucky's legal guardian that perhaps the foster home phase of the process would go more smoothly. But two years later, Brigitte still remained. However, recent incidents convince Lucky that Brigitte is contemplating returning to France and that means that Lucky will have to leave her home town, Hard Pan, and all her friends and become a ward of the state.

As her emotions and chaotic reasoning get the better of her, Lucky plans to runaway. She figures that by running away, she will either make Brigitte realize that she really loves Lucky and wants to stay with her or she will get Brigitte in big trouble with the police for not taking better care of her. Either way, Lucky will know where Brigitte really stands with her.

Lucky is a smart girl but she is not able to see Brigitte's obvious concern for her. Brigitte loves the little girl and has vowed to "rip" anyone's heart out who would think of harming her. Lucky is able to move on in her life and end her worries when she is finally able to say good-bye to her mother, refuse to focus on her father's behavior, and begin the happy, worry-free life of a ten-year-old with Brigitte.

More summaries and resources for teaching or studying The Higher Power of Lucky.

The Higher Power of Lucky from BookRags. (c)2022 BookRags, Inc. All rights reserved.