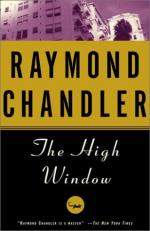 This detailed literature summary also contains Topics for Discussion on The High Window by Raymond Chandler.

"A High Window" is a murder mystery by Raymond Chandler featuring the wise-talking and tough private detective Philip Marlowe. Recounted from the point of view of Marlowe, the novel opens as he is called to the lavish Pasadena home of Mrs. Elizabeth Bright Murdock, an imposing older woman who wants to hire him to retrieve a valuable coin that has been stolen from her deceased second husband's collection. She suspects her daughter-in-law Linda Murdock, the former nightclub singer that her son Leslie Murdock married over her objections, did it. She tells Marlowe that. Linda disappeared about the time the coin was taken. She wants Linda to be found and the coin returned without any publicity or police involvement.

Marlowe takes the case, which is soon complicated when a second private detective named Phillips, apparently also hired by Leslie Murdock, approaches Marlowe for help but whom Marlowe finds dead before he can learn anything. Another figure connected to the case, a coin dealer named Elisha Morningstar, is also found dead by Marlowe.

As the police breathe down Marlowe's neck in their investigation of the Phillips murder, Marlowe follows the trail of clues to the home of Alex Morny, where he discovers Morny's wife is having an affair with a man named Louis Vannier. The plot becomes more complex when Alex Morny hires Marlowe to investigate Vannier to get him away from his wife and he finds Linda Murdock, working again as a nightclub singer in Morny's club, who tells him that Mrs. Murdock knows Vannier very well. Meanwhile a homicide detective named Jesse Breeze pressures Marlowe to give up the name of his client or face arrest as a material witness to the Phillips murder.

Vannier himself turns up dead, apparently of suicide, although Mrs. Murdock's emotionally disturbed secretary Merle Davis comes to Marlowe to confess to killing him. Marlowe learns that in fact Vannier had been blackmailing Mrs. Murdock for years with evidence that she had pushed her first husband Horace Bright out of a window. Mrs. Murdock had also manipulated the susceptible Davis into believing she had actually pushed Bright. Phillips and Morningstar had been murdered by Vannier when a scheme to counterfeit the valuable coin taken from Mrs. Murdock went sour. Leslie Murdock, who had actually stolen the coin as part of the scheme, then killed Vannier when he would not hand over the blackmail evidence.

Marlowe solves the mystery but does not turn his client or her son over to the police. Instead, he follows his own internal code of justice and personally escorts Merle Davis back to her parents in Wichita after assuring her she had never killed anyone.