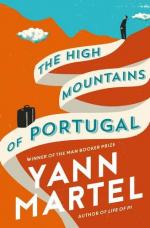 Yann Martel
This Study Guide consists of approximately 64 pages of chapter summaries, quotes, character analysis, themes, and more - everything you need to sharpen your knowledge of The High Mountains of Portugal.

The High Mountains of Portugal Summary & Study Guide includes comprehensive information and analysis to help you understand the book. This study guide contains the following sections:

This detailed literature summary also contains Quotes and a Free Quiz on The High Mountains of Portugal by Yann Martel.

The following version of this book was used to create this study guide: The High Mountains of Portugal, by Yann Martel. Alfred A. Knopf, Canada; Spiegel and & Grau, USA. 2016.

The novel is written primarily in present tense narration. There are no chapter breaks, only divisions into three parts.The story also has elements of magic realism.

The first part of the novel, Homeless, is set in Portugal in 1904. It focuses on the experiences of academic researcher Tomas, intensely grieving the recent deaths of his partner, son, and father. Narration describes the two major ways in which he deals with the intensity of his feelings: by walking backwards (which, he says, is an act of objecting to what has happened to him), and by traveling to the High Mountains of Portugal in search of a mysterious religious artifact. That artifact was constructed by Father Ulisses Manuel Rosario Pinto, a troubled missionary who spent much of his life in service to the citizens of a remote island.

As Tomas begins what amounts to a pilgrimage to find the artifact, he is given a car by a concerned relative (who has also just acquired a rare rhinoceros). At first, the frequently weeping Tomas is uneasy with driving and with the running of the car, but as his journey progresses he becomes increasingly comfortable with its speed, with its handling, and with its maintenance. Eventually, after a series of mishaps (which include his accidentally running over a very young boy) he arrives in the High Mountains and finds the artifact in a small village called Tuizelo: a large crucifix (i.e. statue of Christ on the Cross). Tomas is shocked to discover that Ulisses designed and built the figure of Christ to resemble a chimpanzee. As he cries out, he is helped by a woman named Maria Passos Castro and the local priest.

The second part of the novel is called Homeward and is set in Portugal in 1938. Late-working pathologist Eusebio is visited in the hospital mortuary where he works first by his wife Maria (who brings him the latest novel by mystery writer Agatha Christie, and who talks at great length about her theory of how similar murder mysteries are to the Bible) and by another Maria – Maria Passos Castro.

Eusebio is shocked and surprised to learn not only that Maria Castro has traveled from the High Mountain town of Tuizelo to get him to conduct an autopsy on her husband Rafael, but also that she wants to be present. After Maria Castro explains what happened to her family (including the mysterious death of their very young son), Eusebio eventually agrees to her request and conducts the autopsy, which leads to some intensely surprising discoveries, including the body of a small chimpanzee in Rafael’s abdominal cavity. Once the autopsy is finished, Eusebio watches as Maria Castro climbs into her husband’s skin. He then sews her into it, and settles down to read the book brought by his wife. When his assistant arrives, she discovers the autopsied body and Eusebio, asleep. Narration reveals that Eusebio’s wife is actually dead, and that he conducted the autopsy on her body. As his assistant considers what to do in this unusual situation, she hears Eusebio waking up and weeping. She decides to go and comfort him.

Part three is entitled Home and begins in Canada in 1981, where a seasoned politician, (Peter, grieving the recent death of his beloved wife, discovers a strange but appealing connection with a chimpanzee (Odo) being kept in a research facility. Peter decides to leave his old life, rescue Odo, and move with him to the small town in Portugal (Tuizelo) from which his family came. As Peter and Odo travel, make a new home, and become accustomed to their new lives, they develop a close, intense relationship that eventually leads Peter to a place of relative peace and freedom that he has not felt for a long time.

Eventually, during a visit from his son, Peter discovers that Tuizelo is the town from which his grandfather Rafael and grandmother Maria emigrated; that the house in which he and Odo have settled was, in fact, Rafael and Maria’s home; and that their very young son, who was accidentally killed in unexplained tragic circumstances, has come to be regarded as something of a holy figure in the town. In the aftermath of making all these discoveries, Peter and Odo go out onto the plains of the High Mountains. There, Odo leads Peter to the top of a boulder, where they glimpse a rare rhinoceros, long thought to be extinct. The stress of the day, the climb, and the sighting of the rhinoceros all combine to trigger a fatal heart attack in Peter. After he dies, cradled in Odo’s arms, the chimpanzee runs off, following the trail left behind by the departing rhinoceros.

More summaries and resources for teaching or studying The High Mountains of Portugal.

The High Mountains of Portugal from BookRags. (c)2022 BookRags, Inc. All rights reserved.