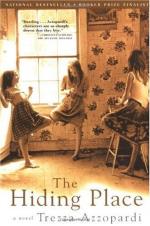 Trezza Azzopardi
This Study Guide consists of approximately 42 pages of chapter summaries, quotes, character analysis, themes, and more - everything you need to sharpen your knowledge of The Hiding Place.

This detailed literature summary also contains Topics for Discussion and a Free Quiz on The Hiding Place by Trezza Azzopardi.

The Hiding Place begins in 1960 before the narrator, Dolores Gauci, is born. Dolores is the sixth of six daughters, born to Mary, a frustrated housewife, and Frankie, a compulsive gambler. Mary and Frankie both see hope in the birth of this last child. Perhaps this one will be the boy they have wanted for so long. However, Dolores' birth is marked by disappointment and the biggest loss Frankie could possibly suffer. Frankie gambles and loses his share in a cafy that is the family's livelihood.

Barely a month later, Frankie takes the rent money to gamble on a horse, leaving Mary to explain this to the rent collector. A fire starts in the kitchen while Mary is outside with the rent collector, and Dolores is burned. Then to add insult to injury, the man who owns their house is an old friend of Frankie's who claims the Gaucis' second child is really his biological child. In exchange for the deed to the house and enough money to fix the fire damage, this man, Joe Medora, insists that Frankie give him his daughter. Despite Mary's refusals, Frankie agrees to the deal.

Five years pass. Dolores has adjusted well to the loss of all the fingers on her burned hand and has grown into a healthy five-year-old. Frankie still gambles, and Mary still does whatever it takes to make ends meet. Their oldest daughter, Celesta, is seventeen now, and Frankie worries about her future. When a wealthy businessman, older than even Frankie himself, offers to marry Celesta, Frankie jumps at the opportunity. Frankie urges Celesta to spend time with this man, and after a disastrous date with a man her own age, Celesta agrees to marry this wealthy businessman.

Fran, the Gaucis' third child, is Dolores' closest friend. Fran is the sister who watches out for Dolores and who is the kindest to her. The only problem is that Fran has a bad habit of setting fires and watching them burn. One day, Fran lights a fire in an old storefront and nearly injures the old couple who owns it. Fran is sent to live at a home for troubled kids.

At the wedding, Joe Medora, who has been on the run all these years, shows up and takes Frankie away. Mary is distraught at the sight of Joe with Frankie. Salvatore, Frankie's old friend, is also concerned and goes looking for Frankie. During the search, Salvatore discovers that money from the business he shares with Joe Medora is missing. Salvatore knows Frankie has stolen it. Salvatore goes in search of Frankie and catches up with him at the docks. There he confronts Frankie and falls into a dry dock to his death. Instead of getting help, Frankie runs off, as was his plan all along.

Dolores and her sisters are sent to separate foster homes after Frankie disappears, and Mary, stressed beyond her limits, is placed into a hospital. Thirty years later, Dolores receives a letter telling her that her mother has died. Dolores goes home for the funeral and to find out a few answers to questions she has about her past.

Rose, Celesta and Luca come to the funeral with Dolores. Dolores tries to talk to them about the past, but the other girls do not want to remember their childhoods. Finally, Dolores manages to get Luca to tell her a few things about their parents, and Dolores realizes how hard her sisters have tried to protect her all these years. All Dolores wants now is to see Fran again. Louis, Celesta's youngest son, brings Fran to Dolores.