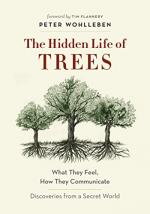 The Hidden Life of Trees Quotes

Peter Wohlleben
This Study Guide consists of approximately 40 pages of chapter summaries, quotes, character analysis, themes, and more - everything you need to sharpen your knowledge of The Hidden Life of Trees.

But isn’t that how evolution works? you ask. The survival of the fittest? Trees would just shake their heads – or rather their crowns. Their well-being depends on their community, and when the supposedly feeble trees disappear, the others lose as well.
-- Wohlleben (chapter 3 paragraph 2)

Importance: This is one of Wohlleben’s earlier disclosures of the interconnectedness of the forest ecosystem. He is also highlighting his belief that many people misunderstand trees, and perhaps biological systems in general through his portrayal of what may be intended as the reader.

I could find no other indicator of the tree’s age on its tiny trunk, which was no more than a third of an inch in diameter, but when I carefully extrapolated the age of the tree from the age of the branch, I discovered that the tree must have been at least eighty years old, maybe more.
-- Wohlleben (chapter 6 paragraph 1)

Importance: This is an example of Wohlleben’s...

More summaries and resources for teaching or studying The Hidden Life of Trees.

The Hidden Life of Trees from BookRags. (c)2022 BookRags, Inc. All rights reserved.