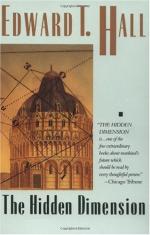 Edward T. Hall
This Study Guide consists of approximately 13 pages of chapter summaries, quotes, character analysis, themes, and more - everything you need to sharpen your knowledge of The Hidden Dimension.

All species in the animal kingdom have basic underlying organizational systems which allow them to survive and reproduce their own. One such system is the use of space. Man can be studied relative to the use of space around himself, in relationships with other humans, and in the cities, homes, and offices he constructs. The Hidden Dimension is such a study, providing a detailed evolutionary progression of the use of space, as well as the particular difficulties man, and specifically Americans, have wrought by the lack of understanding of what space means to all cultural groups on the planet.

Proxemics is a word coined by Hall combining the terms "proximity" and "phonemics," to mean a study of man's use of space as a part of his culture. The thesis of the book is that each animal group has its own physiological, psychological, and sociological proxemic needs and values, and these can be traced to the earliest forms of life on Earth, marching through the evolutionary chain, and culminating with the widely diverse use of space which each human culture exhibits today. Man has many of the proxemic needs and values of lower life forms, but these have been modified with the complexities of human thought, experience, art, literature, and living/working space. Further, man has created a number of extensions of himself, all of which impact his use of space and his relationship to his environment.

Animals perceive their three-dimensional environments through the use of their senses. As animals became more complex, some senses became more refined, while others declined in importance. The use of senses plays a major role in the regulation of distances among members of the same species and, of course, between one species and another. Ethologists have long studied the behavior of animals in their natural environments with an eye toward the effect of changes in those environments. From them have come such concepts as territoriality and social hierarchy. Alterations in the environment of a species, such as crowding, produce radical behavioral changes, including heightened aggression, loss of hierarchical roles, reproductive failure, shock, and mass die offs, even though food and water supplies are ample. Space regulation, then, appears to be a key feature of animal communities.

Building upon the work of ethologists, Hall provides amazing insight into man's interaction with his spatial environment, and demonstrates that each cultural group has unique concepts of territoriality, crowding, distance, and space requirements. Failure to grasp this understanding and to provide for it in our planning and development of structures has created critical cultural clash, particularly in our urban environments. Further, as we march continually toward a more global society, and must interact with cultures whose spatial values are often very different, we encounter misunderstanding and conflict. We can all perceive the three-dimensional world in which we live. The hidden dimension which we must come to understand is culture.

More summaries and resources for teaching or studying The Hidden Dimension.