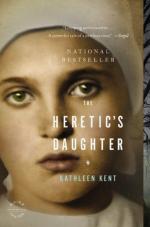 Kathleen Kent
This Study Guide consists of approximately 31 pages of chapter summaries, quotes, character analysis, themes, and more - everything you need to sharpen your knowledge of The Heretic's Daughter.

The Heretic's Daughter: A Novel Summary & Study Guide includes comprehensive information and analysis to help you understand the book. This study guide contains the following sections:

This detailed literature summary also contains Topics for Discussion on The Heretic's Daughter: A Novel by Kathleen Kent.

This book is an intriguing account of witch trials, American colonial political impotence, and ecclesiastical ignorance as well as general crowd hysteria. This is also a coming-of-age story about Sarah Carrier who is 10 years old at the time of the Salem, Massachusetts witch hunts and trials. Relying to some extent on family oral history since one of her ancestors was executed at the trials as well as her own research into the period, the author creates an intriguing story that explores the nature of fear, love, kindness, and forgiveness. Neither the author nor publisher gives any reckoning of how much of this story is historical fiction and how much is actual fact. By default, the book must be classed as historical fiction and for young adults but its uniqueness and narrative ingenuity could be greatly enhanced for the reader if these proportionalities were made explicit. Instead, the reader is given a smoothly contoured story with a richly textured historical setting that from a strictly structural point of view is no different from the novels available in grocery stores today that sweep the reader away into a world of pure fantasy.

Whatever the degree of genuine truth, the reader's appetite for facts-on-the-ground is to some extent satisfied by the author's meticulous descriptive powers and seemingly-authentic rendering of 17th Century American English. Her scenes and characters seem very real and the sense of foreboding that must have surrounded this dark period in American history is communicated quite effectively. A smallpox epidemic, marauding Indians and delirious witch hunts combine to make life in the Massachusetts colony anything but peaceful. Those who survive in this hostile environment are physically and morally strong as well as intelligent and adaptable. Although these threats to survival are locked in a specific time within the story, they are in one form or another forces that have shaped American life for centuries—religious fanaticism, disease, and fear of starvation.

The derivation of the title, The Heretic's Daughter, could be either of the parents of Sarah Carrier and her siblings. Their father is a physically large and powerful Welshman who has come to Massachusetts for religious and economic freedom; in his case, the freedom not to affiliate with any church and the freedom to work everyone in his family including himself to the bone to keep their farm solvent. Sarah's mother Margaret is a very strong-willed and ethically rigorous woman who denies being a witch in order to stand up to the fear mongers and hopefully expose them as cowards. She is tried, convicted, and executed before her children are released from prison through legislative fiat. Her heretical and non-conformist character makes a deep impression on her daughter, Sarah and in turn, affects the family's maturation and ethics over time.

More summaries and resources for teaching or studying The Heretic's Daughter: A Novel.

The Heretic's Daughter: A Novel from BookRags. (c)2022 BookRags, Inc. All rights reserved.