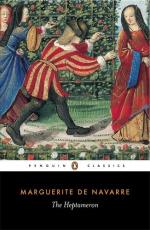 The Heptameron Topics for Discussion

Margaret of Navarre (Sicilian queen)
This Study Guide consists of approximately 46 pages of chapter summaries, quotes, character analysis, themes, and more - everything you need to sharpen your knowledge of The Heptameron.

In what ways do the storytellers' lives mimic the stories that they tell?

Discuss the way in which a frame story works. Do you believe that the frame story is the best way this story could have been told? What other techniques can you think of that might have worked for this story?

Discuss the way in which clergy are presented in the novel. Do you believe the storytellers have a positive view of these men who represent God?

Discuss sexual relationships between men and women as described in the novel. Include specific examples from the novel to support the points that you make.

Explore the idea of chastity as it is presented in this novel. How is chastity viewed by men? In what way is it viewed by women? Describe the differences in the way that both men and women view chastity and...

More summaries and resources for teaching or studying The Heptameron.

The Heptameron from BookRags. (c)2022 BookRags, Inc. All rights reserved.