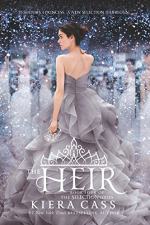 The Heir (The Selection) Summary & Study Guide includes comprehensive information and analysis to help you understand the book. This study guide contains the following sections:

This detailed literature summary also contains Quotes and a Free Quiz on The Heir (The Selection) by Cass, Kiera.

The following version of this book was used to create this study guide: Cass, Kiera. The Heir. Harper Collins, 2015. Kindle Edition.

As the narrative opens, its narrator and protagonist, Eadlyn Schreave, tells readers that even though she sometimes feels overwhelmed, she also feels powerful and in control. Furthermore, she likes to project this identity. Now, however, she faces a threat to this identity because there is unrest in the country. Even though her father, Maxon, eliminated the caste system, the families who are historically from lower castes feel the discrimination against them. Maxon needs to distract the citizens while he figures out how to solve the problem. Maxon and Eadlyn's mother, America, approach Eadlyn about holding her own Selection. Eadlyn is against the idea because she is not ready to get married. Her parents had promised that she would not have to marry anyone. She believes that love makes one vulnerable and weak, two things that she cannot afford to be as the queen. However, she agrees to hold the Selection for three months. Her father also agrees that she does not have to marry one of the candidates if she does not find a good fit. Also, the boys can leave on their own accord.

The process begins with Eadlyn randomly selecting the names of 35 boys. Among them is Kile Woodstock, the son of Carter and Marlee Woodstock, who lives in the palace with his parents and his younger sister, Josie. Kile swears that he did not enter his name and wants to withdraw. However, to the dismay of both Kile and Eadlyn, he cannot.

The Selection does not begin well. Eadlyn goes on a parade with the candidates, and some of the onlookers throw rotten food at her and call her names. Later, Ahren, says things would be better if Eadlyn appeared to be more approachable. In an attempt to show the public that she is serious about the Selection, Eadlyn eliminates eleven candidates, but the public does not appreciate this act either especially because she makes one of the candidates cry. She also stages a kiss with Kile that receives mixed reviews.

Finally, Eadlyn follows Ahren’s advice and begins to go on dates. She has dessert with Hale, one of the candidates who initially caught her attention. It goes well until he starts to ask her personal questions. She goes horseback riding with Ean who tells her that she can choose him if she cannot find anyone else and he will let her rule however she wants. She also has an impromptu date with Baden. In addition, she has a date with Jack Ranger who tries to assault her sexually. She gets away and sends him home.

Afterward, a group of candidates (including Kile, whom she now likes and a candidate named Henri, who has come with a translator, Erik, because he does not speak English well) asks her to cook with them. She agrees and enjoys it. However, the evening ends badly when everyone loves Henri's dessert and Burke, one of the candidates, thinks that the evening was a setup. He attacks his cooking partner, Fox. Burke is sent home, but the other candidates who also were involved in the fight stay. At the start of the fight, Erik had taken a scared Eadlyn to her room.

The fight makes newspaper headlines. Things continue to go wrong as Badon tells her that he is leaving because she did not immediately accept his date invitation and a visitor to the palace tells the newspaper that Eadlyn said that the Selection is work. During this period, she gets closer to Erik and Kile who both comfort her and say that they are there for her. She also gets closer to Henri.

After the news reports, Eadlyn realizes that she needs to do something to get The Selection back on track. Therefore, she suggests that Ahren’s girlfriend, the French Princess Camille, come to palace. Her father agrees. Camille comes and Eadlyn gets closer to both Erik and Henri, as individuals, at the party she throws for Camille. She also realizes that the problems she has with gaining her people's love and being open to the candidates are due to her personality.

The next evening at dinner, Maxon finds out that Ahren is married and Eadlyn realizes that he and Camille eloped. She goes to her room and finds a letter Ahren left her explaining that their talk, in which she suggested that Camille might not be his soul mate, pushed him to marry Camille before Eadlyn made him choose her over Camille. Eadlyn goes to find her parents to tell them about the letter and finds her father's room full of pictures of her mother. This lets her see how much he loves her. Then the guards find her, and she discovers that her mother has had a heart attack because Ahren left. At the hospital, she finds her father crying as well as her mother's close friends. Then the candidates come to pray for her mother. Seeing this outpouring of love makes Eadlyn realizes that it is important for her to hare love in her life as well. She vows to have a ring on her finger by the end of the Selection.

The Heir (The Selection) from BookRags. (c)2022 BookRags, Inc. All rights reserved.