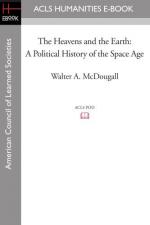 The Heavens and the Earth Summary & Study Guide

Walter A. McDougall
This Study Guide consists of approximately 56 pages of chapter summaries, quotes, character analysis, themes, and more - everything you need to sharpen your knowledge of The Heavens and the Earth.

The Heavens and the Earth Summary & Study Guide Description

The Heavens and the Earth Summary & Study Guide includes comprehensive information and analysis to help you understand the book. This study guide contains the following sections:

This detailed literature summary also contains Topics for Discussion on The Heavens and the Earth by Walter A. McDougall.

The Heavens and the Earth by Walter A. McDougall is a history of the space age. McDougall looks at the space age not only from the development of the technology, but also within the context of the Cold War. It is not how the technology came into being but the international political events that led to the different events in space history. The book begins in Russia where Tsar Alexander is assassinated by students who made a bomb in the chemistry lab that Alexander's father financed. Science was being funded in Russia in the Tsarist days when the twenty-four year old Konstantin Tsiolkovsky was already dreaming of and working out the physics for rockets. Tsiolkovsky wasn't the only Russian with these dreams in pre-Revolutionary Russia. After the Revolution, science and technology had to find its place in the new hierarchy until World War I pushed the issue to the forefront and forced Stalin to recognize its importance.

McDougall traces the development of R & D in both the United States and Russia in order to construct the history of the space age. The development of science and technology do not take place without money, and the space programs in both countries did not take place without huge amounts of government spending and promotion of research and development activities, both in and out of the military sectors. In the United States the commitment to the space program resulted in the biggest commitment of resources in history. Eisenhower made the commitment because the post-World War II world was in the throes of the Cold War, of which the weapons and space races were a part. For the United States, the commitment of the federal resources to science, education, industry, etc. was contrary to the prevailing economic thinking of the time. The role for government in capitalism was not to interfere in the private sector and finance R & D, leading to a successful space program. This is why Eisenhower tried to keep down spending.

The space race began when the Russians launched Sputnik and put a satellite into space ahead of the Americans. Eisenhower downplayed the situation, but the Russians got as much mileage out of it as possible. They had the prestige of being first and were using it to their advantage, saying that the U.S. lagged behind Russia in science and technology. This was also being used to prove the superiority of the Soviet system over capitalism which the Russians tried to use to their advantage in the Third World and in Europe. Most of the world believed in the Soviet superiority. It wasn't until years later that the magnitude of Khrushchev's bluff became known.

But this set the stage for the American entry into the space program with all of its emphasis on R & D and all of its spending. It also set the stage for all of the events involving treaties and agreements at the United Nations and why most of them were window dressing: the United Sates didn't want to give away any of its secrets and the Russians didn't want anyone to know how far behind they actually were. McDougall does a good job of presenting the history of the space age in its proper political framework and shows how various international events led to various events in the space race.

More summaries and resources for teaching or studying The Heavens and the Earth.

The Heavens and the Earth from BookRags. (c)2022 BookRags, Inc. All rights reserved.