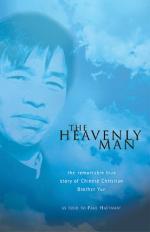 Brother Yun
This Study Guide consists of approximately 30 pages of chapter summaries, quotes, character analysis, themes, and more - everything you need to sharpen your knowledge of The Heavenly Man.

This detailed literature summary also contains Topics for Discussion and a Free Quiz on The Heavenly Man: The Remarkable True Story of Chinese Christian Brother Yun by Brother Yun.

Brother Yun was named Liu Zhenying at his birth in 1958 in the farming village Liu Lao Zhuang, which is located in the China province called the Henan Province. At sixteen, Yun's life is forever changed when his mother urges her family to accept Jesus as their saviors and to commit their lives to following God's way. Yun does so and their first prayer - the restored health of his father - is granted within days. Yun's thirst for knowledge drives him to ask questions of his mother, but she had accepted Jesus as a young woman and now doesn't remember much. Unsatisfied and longing for information, Yun goes in search of a Bible. In China in these days, Bibles are illegal and the one man who probably has a Bible refuses to allow Yun to even look at it. Yun is told that if he wants a Bible he must pray for it. When that doesn't produce results, Yun prays and fasts. It takes weeks but one day Yun has a vision of two men giving him a Bible. The two men show up and Yun much later learns that the owner of the Bible had had a vision of his own - that he was to give the Bible to Yun, but he hadn't acted sooner out of fear.

Yun immediately begins to study diligently until the day he hears God command that he must now spread the gospel as he has learned it. Yun begins to answer requests to preach and teach, though the responsibility carries incredible danger. In fact, Yun is arrested on the day he goes with his future wife, Deling, to buy a marriage license. He is accused of causing social unrest and of disturbing the peace with his preaching. Yun manages to evade the law for some time except for some minor brushes but is eventually arrested. He is in jail while Deling gives birth to their son, Isaac. Yun is released but both he and Deling know that his light for Jesus is so bright that it will attract people hungry for the word. This proves to be true, and Yun is arrested when their second child, Yilin, is just seven months old.

Yun is tortured, held in solitary confinement and threatened, but each time he meets pain with courage and continues to share the gospel with anyone he encounters, including prison guards and convicted prisoners. When he finally escapes China, he begins a tour in North America, talking of his experiences in China. When someone calls him a liar, Yun is hurt but soon comes to realize that he is not free of persecution even in a country where freedom of worship is a protected right.

More summaries and resources for teaching or studying The Heavenly Man: The Remarkable True Story of Chinese Christian Brother Yun.