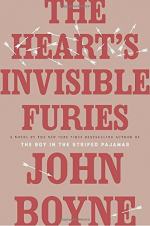 Related Topics
A Ladder to the Sky

Boyne, John
This Study Guide consists of approximately 36 pages of chapter summaries, quotes, character analysis, themes, and more - everything you need to sharpen your knowledge of The Heart's Invisible Furies.

This detailed literature summary also contains Quotes and a Free Quiz on The Heart's Invisible Furies by Boyne, John .

The following version of this book was used to create the guide: Boyne, John. Heart's Invisible Furies. Hogarth, 2017.

This novel is a first person narrative, detailing the significant events in the life of the protagonist, Cyril Avery. It is also a cultural history of the sociopolitical and sociocultural changes in his homeland, Ireland, within his lifetime (1945-2015), particularly in regard to homosexuality. Banished from her hometown by a priest who denounces her as a whore for becoming pregnant out of wedlock, Cyril's birth mother, Catherine Goggin, moves to Dublin. She finds steady work in a teahouse, and she puts her son up for adoption once he is born. The violent circumstances of Catherine Goggin's public shaming and her son's birth introduce a theme in the novel. People are shaped by both personal events and the sociopolitical and sociocultural norms of the time and place in which they live.

The novel is divided into three books. Book one takes place in Dublin, Ireland. Cyril is adopted by Charles Avery, a businessman who is frequently imprisoned for tax evasion, and Maude Avery, a novelist. The Averys are not neglectful, but they are not nurturing either. An intelligent and reticent child, Cyril's strongest bond is with his childhood friend, Julian Woodbead. When heterosexual, sexually precocious charmer, Julian, suggests the two boys show each other their penises, he unknowingly awakens Cyril's first sexual urges. Julian is Cyril's closest friend for most of their adult lives, but Cyril also has a secret, passionate crush on him. He stays closeted to protect his friendship with Julian. However, his choice is also influenced by Ireland's repression of homosexuals. For most of his life, homosexuality is illegal in Ireland. Though he does not know her relationship to him, Catherine Goggin, who is now the mistress of the teahouse where she works, is one of the few people in Ireland to whom he comes out. Though he has secret, casual encounters with many men, he also has a strict, Catholic girlfriend of convenience, Mary-Margaret Moffat. He is nearly arrested when Mary-Margaret and a policeman (garda) follow him during one of his casual encounters. However, he is spared when the Irish Republican Army (IRA) sets off a bomb that topples a nearby statue, crushing Cyril's girlfriend and the garda. Grateful, Cyril swears he will only date women, despite his not being attracted to them.

After he vows to date women, Cyril remains celibate...with one important exception. By 1973, he is engaged to his best friend, Julian's sister, Alice Woodbead. On Cyril's wedding day, he comes out to Julian and confesses his love for him. A furious Julian insists Cyril marry Alice. Cyril does, but he abandons her at the reception. He emigrates to Amsterdam, Holland. Book two takes place in Amsterdam, Holland, and New York City, New York.

Homosexuals are not repressed in Holland. Cyril finally openly expresses his sexuality without fearing for his safety. He finds domestic happiness in his adopted country, living with his boyfriend, Bastiaan Van der Berg, and their informally adopted son, Ignac. His contentment with his new life illustrates another theme in the novel: A human life is a story, and the author's perspective on that story changes over time. While he was living in Ireland, Cyril believed it was necessary for him to remain closeted. In Holland, he questions whether his choice was inevitable. If not, he bears responsibility for how that choice affected his relationships with those he loved.

Cyril's boyfriend, Bastiaan, is a doctor who specializes in communicable diseases. In 1987, Cyril and his family move to New York City. Bastiaan treats AIDS patients at the height of the American epidemic, and Cyril volunteers to visit AIDS patients in the hospital where Bastiaan works. Eventually, he finds his former best friend, Julian Woodbead, dying of AIDS in a New York City hospital bed. Cyril and Julian reconcile before Julian dies. Julian tells Cyril his sister, Alice, was pregnant with Cyril's child when he abandoned her. He has a biological son, Liam Woodbead, to whom Julian has been a beloved father figure. Julian demands that Cyril tell Alice and Liam how Julian died. When Bastiaan publicly embraces his grieving boyfriend on a New York City street, two men attack the two. Cyril is permanently disabled, and Bastiaan dies before an ambulance arrives. Adrift without his only love, Cyril returns to Ireland with his informally adopted son, Ignac.

Like book one, book three takes place in Dublin, where same sex marriage is legalized within Cyril's lifetime. There, Cyril mourns Julian and Bastiaan, reconciles with Alice, and cares for his dying adoptive father, Charles Avery. [His adoptive mother, Maude Avery dies when Cyril is still a child, and she posthumously becomes a successful, critically acclaimed novelist.] Cyril also forms new familial bonds. He meets his biological son, Liam. He forms a close relationship with his biological mother, Catherine Goggin. In the epilogue, he is the best man at Catherine's wedding, and all of his family members are in attendance. By then, he has been diagnosed with an inoperable brain tumor. He regularly speaks with the ghosts of loved ones, who assure him he will be joining them soon.

More summaries and resources for teaching or studying The Heart's Invisible Furies.