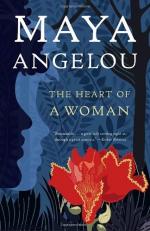 The Heart of a Woman Summary & Study Guide

Maya Angelou
This Study Guide consists of approximately 23 pages of chapter summaries, quotes, character analysis, themes, and more - everything you need to sharpen your knowledge of The Heart of a Woman.

The Heart of a Woman Summary & Study Guide Description

The Heart of a Woman Summary & Study Guide includes comprehensive information and analysis to help you understand the book. This study guide contains the following sections:

This detailed literature summary also contains Topics for Discussion on The Heart of a Woman by Maya Angelou.

The Heart of a Woman by Maya Angelou is a memoir detailing the woman's powerful journey from young adulthood in San Francisco to her mid-thirties, mother to a university-aged son, living in Ghana.

The prologue begins with Maya Angelou and a group of others chanting an old spiritual. The author talks about blacks and whites being befuddled. The 1950s and 1960s were a tumultuous time and there were many cases in which people simply did not know which side was up. The time signified many accomplishments for blacks in all areas of society.

Angelou came up in a time that was marked by racial tension, oppression, and devastating circumstances for blacks throughout the country. As the daughter of a vivacious, courageous and outspoken mother, it is no wonder that Angelou would become the powerhouse known throughout the world today.

At the center of Angelou's life throughout the entire book is her son, Guy, civil rights, her devotion to the arts, and the raising up of blacks - black women, in particular.

From attending protests and lectures by up and coming activist leaders to throwing herself wholly into activism, Angelou never loses sight of what matters most. Those activities led to a stint as coordinator of the Southern Christian Leadership Conference and working with Martin Luther King, Jr. to interactions with Malcolm X and other civil rights leaders.

The author's various activities in the arts community are numerous. Angelou admits that she was a mediocre singer and competent dancer and actress. Those roles propelled her forward and allowed Angelou to tour the world. The real breakthrough came when John Killens urged Angelou to return to New York to become a part of the Harlem Writers Guild. The Guild would help Angelou to harness her natural talent and to hone her craft to present the best possible work. Criticism was hard but valuable.

During this time, Guy grew up. The young man that had been taught to question everything and give respect to those who deserved it made Angelou proud. Guy was intelligent, well spoken, polite, ambitious, and devoted to the same cause his mother worked so hard for in order to eradicate racism worldwide.

The author also details her relationship with Vusumzi Make, a well known African leader. Vus pursued Angelou relentlessly from their first meeting and would not accept anything less than to have Angelou as his wife. The relationship became rocky due to Vus' irresponsibility and infidelity. Also, Angelou could not bring herself to be what Vus wanted in a typical African wife.

Throughout the book, Angelou tells tales of people she encountered along the way. They include Billie Holiday, the Rat Pack, Ossie Davis, Sidney Poitier, Abbey Lincoln, Max Roach, Lou Gosset, Jr., and many others that were famous or blossoming during the era.

The book ends with Guy going off to the University of Ghana and leaving Angelou to her own devices for the first time.

More summaries and resources for teaching or studying The Heart of a Woman.

The Heart of a Woman from BookRags. (c)2022 BookRags, Inc. All rights reserved.