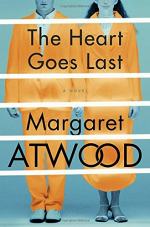 Margaret Atwood
This Study Guide consists of approximately 45 pages of chapter summaries, quotes, character analysis, themes, and more - everything you need to sharpen your knowledge of The Heart Goes Last.

This detailed literature summary also contains Quotes and a Free Quiz on The Heart Goes Last by Margaret Atwood.

“The Heart Goes Last” is a contemporary dystopian novel by Margaret Atwood which follows the efforts of husband and wife Stan and Charmaine to survive and help bring down the Positron Project, supposedly aimed at ending unemployment and crime but in reality performing illegal organ harvesting and sexually altering the minds of people. When the novel begins, Stan and Charmaine are living in their car somewhere in the American Northeast, having both lost their good jobs to an economic downturn. Charmaine takes work at a local bar, where she sees a commercial for a call for applications for the Positron Project. Pay, work, and a good house are promised. Charmaine convinces Stan to apply with her, but Stan’s criminal brother, Conor, warns them about attending. Conor says he has heard bad things about the program, but Stan and Charmaine are desperate to stop living in their car.

Stan and Charmaine apply to - and are accepted into - the Positron Project. The CEO of the project, Ed, explains the Positron Project as seeking to eliminate unemployment and crime. The Project is occurring in the revamped town of Consilience, which includes the newly-constructed Positron Prison. For alternating months, people will spend the month either in Positron Prison, or in Consilience. Those in the prison will work for pay at jobs that range from agriculture to cutting-edge robotics, while those living on the outside in houses in the town will work for pay doing jobs dedicated to maintaining the prison, the town, and daily life in general.

A year passes by for Stan and Charmaine, spending one month in prison and one month out. Charmaine especially comes to love life in the Project, while Stan has some doubts and reservations. In the community, Stan handles electric scooter repair while Charmaine handles work in a bakery. In the prison, Stan works in poultry while Charmaine works in the hospital, handling the Procedure – administering a lethal injection to criminals and dangerous elements in the Project. The injections always ensure the heart is the last organ of the body to stop functioning

As Stan comes to learn, Charmaine is having a sexual affair with a man named Phil who goes by the name of Max, Stan’s monthly alternate. Phil’s significant other, Jocelyn, confronts Stan before he can do anything about the affair. Jocelyn reveals herself to be a member of Surveillance, which keeps an eye on the population. For the next few months, she forces Stan to have sex with her while Charmaine is kept on beyond her monthly rotation in the prison. Jocelyn later explains that Stan’s willingness to do what had to be done to survive is proof she can trust him. She reveals herself to be a founding member of the Project, noting that Ed and the Project have lost their way. The Project is now a front for illegal organ, DNA, bone, and body part harvesting. She also reveals that Positron, which is producing popular sex robots, has engineered a mind-altering program which forces the patient to become sexually obsessed with the first person the patient sees. This is often done against the patient’s will. Because Jocelyn helped to build Positron, she reveals she now has a responsibility to help bring it down.

To smuggle Stan out of Positron, he is put before Charmaine for the Procedure. This horrifies Charmaine, who has been told she is being watched by her superiors for loyalty to Positron. Charmaine has no choice but to administer the drug, which she is unaware will only knock out Stan. With Stan’s removal, Ed sets his sights on Charmaine, seeking to have her mind altered to imprint on him. Ed and Charmaine travel to Las Vegas for this to occur, not knowing that Stan has been smuggled to Las Vegas ahead of them with secret documents exposing the entire operation at Positron. Conor and his criminal buddies assist Stan in getting the information to elderly TV star and news reporter, Lucinda Quant.

Upon arrival in Vegas, Ed is overpowered and given the operation, after which he imprints on Lucinda. Charmaine voluntarily undergoes the operation so she can imprint on Stan. A year later, Charmaine and Stan are happily living out their lives, having had their first child and looking forward to another. Jocelyn drops by to tell Charmaine she never actually had the operation, meaning that the entire past year has been entirely genuine love. But this also causes Charmaine to think about Max again.

More summaries and resources for teaching or studying The Heart Goes Last.