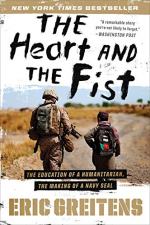 The Heart and the Fist Summary & Study Guide

Eric Greitens
This Study Guide consists of approximately 33 pages of chapter summaries, quotes, character analysis, themes, and more - everything you need to sharpen your knowledge of The Heart and the Fist.

The Heart and the Fist Summary & Study Guide Description

The Heart and the Fist Summary & Study Guide includes comprehensive information and analysis to help you understand the book. This study guide contains the following sections:

This detailed literature summary also contains Topics for Discussion on The Heart and the Fist by Eric Greitens.

“The Heart and the Fist: The Education of a Humanitarian, the Making of a Navy SEAL” is an autobiographical account by Eric Greitens of his early life and time as a Navy SEAL around the world in pursuit of defending America and helping others. Eric begins his book with a preface saying that courage and compassion go hand-in-hand, and are essential for one another. Eric then moves to his service in Iraq, where a friend and Marine named Travis Manion is killed in combat. Eric and his friend and Intel Officer, Joel Poudrier, decide they must do something in honor of Travis’s sacrifice, and in honor of all those who have served and want to do more.

Eric, a Missouri native, then moves back more than a decade to the early 1990s, where he recounts wanting to experience something of the world in college. He travels to China, where he meets with student protestors who campaigned against Communism. This inspires Eric, because he sees history in the making. Eric takes up boxing upon his return from China, which will strengthen his faith and help him to become more courageous. Through boxing, Eric learns that life, and whatever else he does such as boxing, are indistinguishable from one another. Each are dependent on the other. (Eric will ultimately come to see his work as both SEAL and humanitarian as indistinguishable from one another.) Eric next travels to Croatia, where he assists and documents Bosnian refugees from the Serbian-led massacres throughout Bosnia. Eric encounters people who want to know why America won’t intervene to stop the genocide. This deeply troubles Eric, who wants to be able to help these people in a protective, rather than a reactive way.

Eric next travels to Rwanda, to help Tutsis who have managed to survive the Hutu-led genocide. Eric here learns that true evil is possible at the hands of human beings. He then travels to Bolivia, where he sees poverty on a massive scale, sees how children live in the streets addicted to sniffing glue, and sees how these children will never have a chance. However, he is encouraged by an American married couple named Jason and Caroline, who are working with some of the kids, keeping them clean, and keeping them off the streets. This inspires Eric to want to do the same. He finishes up his education at Oxford in England, writing in a dissertation about how important it is that the long-term health and vitality of those who have suffered is not about what they are given, but about what they do with their lives after volunteers and aid workers have gone.

Eric then decides to become a SEAL. He attends Naval Officer Candidate School, and upon graduation, begins Basic Underwater Demolision/SEAL training. Eric’s training is brutal, designed to ensure only the toughest, most disciplined men make it through to Advanced Training, which Eric does. Even then, more men drop out, but Eric perseveres. As a Drill Instructor explains to another SEAL candidate, there is no second-place prize in war. One wins, or one dies. Eric survives Advanced Training, and becomes a SEAL. Due to his humanitarian work and studies, Eric is sent to Iraq, and to various posts around the world where he ensures American success by drawing on all that he has experienced and learned. As he explains to the reader, victory isn’t only winning on the battlefield, but it is total advantage: it is about winning the hearts and minds of the people one is trying to help. In Iraq, for example, Eric notes success finally came about when American forces began to really reach out to local populations, taking an interest in their lives, and earning their trust. This, Eric explains, helps to create American friends and allies in future generations.

Eric ultimately returns to the beginning of his book, where he decides he must do something regarding the death of Travis Manion. Eric visits the wounded at Bethesda Naval Hospital, and learns that everyone wishes they could do something to help their comrades if they cannot return to combat. Eric therein begins The Mission Continues, a non-profit which offers fellowships to veterans to allow them to reach out and do good deeds around the country, including helping other veterans. As of the book’s afterword, written in January, 2012, The Mission Continues has given more than 250 fellowships, and has had more than 25,000 volunteers assist with projects.

More summaries and resources for teaching or studying The Heart and the Fist.

The Heart and the Fist from BookRags. (c)2022 BookRags, Inc. All rights reserved.