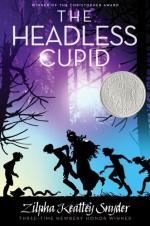 Zilpha Keatley Snyder
This Study Guide consists of approximately 31 pages of chapter summaries, quotes, character analysis, themes, and more - everything you need to sharpen your knowledge of The Headless Cupid.

This detailed literature summary also contains Topics for Discussion and a Free Quiz on The Headless Cupid by Zilpha Keatley Snyder.

The Headless Cupid by Zilpha Keatley Snyder is a work of fiction. A mystery takes place in an old house inhabited by a new family, and members of two families have to learn how to get along.

Jeff and Molly Stanley are newlyweds. Jeff's wife had died the year before, leaving him a widow with four children: David, age eleven; Janie, age six; and Blair and Esther "Tesser", four-year-old twins. The couple buys a new house in Steven's Corners, a rural country town. Amanda, Molly's daughter from her first marriage, is due to arrive and make her home with her mother and new family.

The Old Westerly House is the main setting in the story. Built in 1895 by Old Man Westerly, the house became inhabited by a poltergeist, or noisy ghost, shortly after the house was built. The appearance of the poltergeist is attributed to the presence of Westerly's teenage daughters, Mabel and Harriette. The poltergeist was destructive, throwing rocks and causing general mayhem in the house. The worst thing the poltergeist did was to behead the cupid that adorned the newel post at the end of a hand carved bannister. The head disappeared and had not been seen in many years until it reappeared after Amanda and the Stanley kids began to delve into the house's history and the supernatural.

David Stanley is the protagonist in the story. David is an average eleven-year-old boy. David is exceptionally bright and mature for his age. David grew up fast when his mother died just over a year ago. It was clear to David that he needed to help his father with the other children and with duties at home. David is also quite intelligent, which reflects on his father's profession as a college professor. Overall, David is a well-behaved boy who is respectful of his father and stepmother. It is also David's nature to be nurturing and protective of Janie, Tesser, and Blair.

David has the gift of premonition which he inherited from his mother's side of the family. David does not talk about the gift very much but certainly knows when something is going to happen. The other children also have gifts, particularly Blair who is intuitive and can communicate with animals.

Amanda arrives on the scene and is ready to make things as miserable as possible for everyone. Amanda is angry about her parents' divorce, angry about being taken away from the city and her best friend Leah, and angrier that she is expected to live in an old house in the middle of nowhere. Twelve-year-old Amanda, who is determined to study the occult, will do almost anything to upset Molly and get even with everybody whether or not they committed some offense against her.

Amanda attempts to take the younger kids under her wing and to teach them about magic. David is old enough to understand most of Amanda's interest in the occult, and although he is also interested, it is important to protect the younger children.

Things go awry when Jeff must leave on a three week trip, leaving Molly home with the kids. Suddenly the legendary Westerly poltergeist reappears, mirroring the actions recorded in 1896. The poltergeist turns out to be Amanda, who is caught in the act by David and Blair.

One night a supernatural occurrence happens that was not planned by Amanda. Rocks and other debris fall down the stairs along with the long lost cupid's head. Amanda is now convinced that there really is a poltergeist. Amanda confesses.

David learns that it was Blair that dumped the box down the stairs. Blair had been guided by a ghost girl who told him where to find the box and that it was time the cupid's head was returned. Blair answers only a few questions and then claims not to remember what happened, leaving David wondering who or what really lives in the house with him and his family.

More summaries and resources for teaching or studying The Headless Cupid.