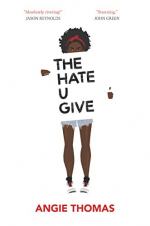 Related Topics
On the Come Up
Concrete Rose

The Hate U Give Summary & Study Guide

Angie Thomas
This Study Guide consists of approximately 44 pages of chapter summaries, quotes, character analysis, themes, and more - everything you need to sharpen your knowledge of The Hate U Give.

The Hate U Give Summary & Study Guide Description

The Hate U Give Summary & Study Guide includes comprehensive information and analysis to help you understand the book. This study guide contains the following sections:

This detailed literature summary also contains Quotes and a Free Quiz on The Hate U Give by Angie Thomas.

Starr Carter is socializing at a party in her neighborhood, Garden Heights, when she runs into Khalil Harris, an old friend from childhood she has not seen in a while. As they catch up, a gun fight breaks out and they flee the party. They drive off in Khalil's car and are pulled over by a police officer named Brian Cruise. Cruise orders Khalil out of the car and searches him, then walks back toward his cruiser. As he does so, Khalil turns to look into the window to ask Starr if she is okay, and Cruise shoots him in the back three times, killing him.

Even before the shooting, Starr's life is complicated. She lives in the urban, predominantly black neighborhood of Garden Heights with her parents and two brothers, Seven and Sekani, but attends a majority white private school called Williamson in nearby affluent Riverton Hills. Her uncle Carlos, a policeman, also lives in Riverton Hills. She has a white boyfriend that she is afraid to tell her father about. After the shooting, she finds her white friends do not understand what she is going through, Uncle Carlos defends Officer Cruise, while her father Maverick is certain that the shooting was racially-motivated. Meanwhile Maverick feuds with a local gangster named King. Maverick used to be a member of his gang, but they have since fallen out.

Starr goes to the police station to give her report of the shooting, and the police try to make Khalil's death seem justified, implying he was involved with gangs and drugs. At Khalil's funeral, King tries to claim he was part of his gang. Starr meets Ms. Ofrah, a community activist and attorney who offers to represent her. She continues to have friction with one particular friend at school named Hailey, who makes a blatantly racist remark, and then tries to laugh it off.

Maverick offers protection to a neighborhood boy and member of King's gang named DeVante, increasing King's ire. Officer Cruise's father conducts a television interview, lying about the events of the shooting, and claiming that Cruise felt his life was in danger. Starr tells her own version to the district attorney conducting an investigation into the shooting, and then does a television interview of her own. In the interview she mentions King. The Carters' house is shot up in a drive-by shortly thereafter, prompting the family to wonder if it was the police or King's gang who is responsible. Starr tells her story once more, to the grand jury who will choose whether or not to indict Officer Cruise.

Hailey makes another insensitive remark at school, and Starr punches her, for which she is suspended. Seven calls Starr while she is at her boyfriend's house and tells her that DeVante is missing. The three find DeVante, badly beaten, at King's house and get him safely out and into their car. On the radio, the grand jury's decision is announced. Officer Cruise will not be indicted. Violent demonstrations immediately break out in Garden Heights, businesses are destroyed and looted, cop cars are burned, and the police lob tear gas into the crowd. The kids find Ms. Ofrah, who gives Starr her megaphone. Starr uses it to admonish the police for not caring about what happened to Khalil. Everyone is choking on tear gas when they are picked up in a car by a friend of Maverick's, who take them to the safety of the corner store Maverick owns. It is not safe for long, however, as someone opens the door and tosses a burning bottle inside.

Maverick and a neighbor rescue the kids as the store burns. Across the street, King and his gang point and laugh. When the police arrive on the scene, the neighbors come together to declare King the perpetrator of the fire, despite a proscription in the community against “snitching” [425]. King is arrested for arson. Hailey reaches out to Starr with an insincere apology, and Starr decides she does not need people like this in her life. Maverick vows to rebuild the store, and Starr vows to never forget Khalil and to continue to speak up in the face of injustice.

More summaries and resources for teaching or studying The Hate U Give.

The Hate U Give from BookRags. (c)2022 BookRags, Inc. All rights reserved.