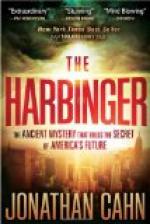 The Harbinger: The Ancient Mystery That Holds the Secret of America's Future Summary & Study Guide

Jonathan Cahn
This Study Guide consists of approximately 35 pages of chapter summaries, quotes, character analysis, themes, and more - everything you need to sharpen your knowledge of The Harbinger: The Ancient Mystery That Holds the Secret of America's Future.

The Harbinger: The Ancient Mystery That Holds the Secret of America's Future Summary & Study Guide Description

The Harbinger: The Ancient Mystery That Holds the Secret of America's Future Summary & Study Guide includes comprehensive information and analysis to help you understand the book. This study guide contains the following sections:

This detailed literature summary also contains Topics for Discussion on The Harbinger: The Ancient Mystery That Holds the Secret of America's Future by Jonathan Cahn.

The Harbinger by Jonathan Cahn is an intriguing non-fiction book that compares the parallels between ancient Israel and modern America to demonstrate America's pending destruction. After anonymously receiving an ancient seal in the mail, Nouriel seeks answers from the prophet who tells him about the Nine Harbingers and how these have manifested in America since 9/11/2001, foreshadowing the nation's fall as a result of turning from God's way. The Harbinger is intriguing but disturbing as it provides evidence to demonstrate how the Nine Harbingers have manifested to warn Americans to return to God, else they will face the demise of their nation.

Nouriel approaches Ana, an important publisher, to share a mystery that explains all that has happened since 9/11/01 in America and will happen, as well as how it relates to the nation's future. After anonymously receiving an ancient seal in the mail, Nouriel goes for a walk where he encounters the prophet who is sent to teach him about the mysteries of the Nine Harbingers and how the ancient prophecy sent to Israel applies now to America. The prophet tells Nouriel about how ancient Israel was a nation blessed by God, but when they turned from His ways, the Nine Harbingers manifested as a warning of their pending destruction.

The prophet produces the seals of each of the Nine Harbingers, revealing their meanings to Nouriel and showing how the harbingers that manifested as a warning to ancient Israel have now appeared in America since the attacks on 9/11/01. All of these connect to show that America will fall and has already begun to fall as a result of their failure to follow God's ways as prophesied in Isaiah 9:10; the nation's only hope to avert judgment is to repent and return to God's ways.

The prophet teaches Nouriel about how 9/11 is related to America's financial collapse of September 2008, just as ancient Israel suffered financial crises as part of their warnings. Nouriel also learns how this is all related to the Shemitah, the seventh year designed for rest, and he finds that America's crises began on Shemitah with the attacks at Ground Zero just as the financial collapse occurred on Shemitah. The prophet teaches Nouriel about the three witnesses and how their proclaimed vow to rebuild after the breach demonstrates their defiance according to the ancient prophecy, while simultaneously foreshadowing their fall.

Nouriel also learns that the attacks of 9/11 took place on the same ground where America was consecrated and dedicated to God, another aspect adhering to the prophecy. The prophet urges Nouriel to repent, and Nouriel turns his life over to God, accepting his role as the scribe sent to warn America of the danger it faces, and this is why he contacts Ana. Through Nouriel's narrative, Ana's skepticism transitions into belief, and she agrees that it is important for Nouriel to share his message with the entire nation. After warning Nouriel that he will be despised for his message, the prophet reminds him that this outcome is better than having the nation's destruction on his hands, so he urges Nouriel to sound God's alarm.

More summaries and resources for teaching or studying The Harbinger: The Ancient Mystery That Holds the Secret of America's Future.

The Harbinger: The Ancient Mystery That Holds the Secret of America's Future from Gale. ©2005-2006 Thomson Gale, a part of the Thomson Corporation. All rights reserved.