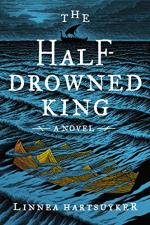 Linnea Hartsuyker
This Study Guide consists of approximately 119 pages of chapter summaries, quotes, character analysis, themes, and more - everything you need to sharpen your knowledge of The Half-Drowned King.

This detailed literature summary also contains Quotes and a Free Quiz on The Half-Drowned King by Linnea Hartsuyker.

The following version of this book was used to create this study guide: Hartsuyker, Linnea. The Half-Drowned King. New York: HarperCollins, 2017.

This novel begins with Ragnvald Eysteinsson competing in a contest aboard the ship of Solvi Hunthiofsson. During the contest, Solvi tries to kill Ragnvald. Ragnvald sinks into the ocean and has a vision where a golden wolf stalks into the sea goddess Ran’s hall, burning men or making them shine. When it reaches Ragnvald, he shines above all others and the wolf's matted hair becomes even more burnished. Ragnvald is then rescued by a kind fisherman. While this is happening, his sister Svanhild figures out that it is their stepfather Olaf who sent Ragnvald raiding with Solvi in order to be killed. She is also resistant to marry the man her stepfather wants her to.

The siblings are finally reunited at the annual gathering. There Svanhild meets Solv, who i falls madly in love with her. She rejects him when she learns his name but Solvi still promises her that she will have a home with him anytime she wants it. Ragnvald tries to sue Solvi and then Olaf at the gathering but his suit fails. That night, Olaf tries to kill Ragnvald but only wounds him and then is outlawed by King Hakon. Svanhild is sent to live with Hrolf Nefia, who is the father of Ragnvald's beloved Hilda, while Ragnvald travels with King Hakon's men. They stop at a farm on the island of Smola and Ranvald kills the draugr that has been haunting the people.

Solvi sails back to Tafjord with his men. King Harald and his uncle Guthorm are visiting and before they leave, Harald and Guthorm warn King Hunthiof and Solvi that if they stand in the way of Harald's conquests they will be crushed. Solvi talks to Hunthiof about the situation with Ragnvald, which makes Hunthiof angry. Solvi also tells his father that he wants Svanhild for a wife. Hunthiof thinks it would be a good idea in order to repair the relationship with Ragnvald so Solvi departs from Tafjord once again.

King Hakon’s men and King Harald’s men arrive at Yrjar where Ragnvald gains even more favor with Hakon and becomes Hakon’s sworn man. During Svanhild’s time at Hrolf Nefia's farm Hrolf invites Thorkell, the man who Olaf wanted her to marry, over for a feast. His presence prompts Svanhild to run away to the town of Kaupanger in hopes that she can catch a ship that will take her to Yrjar and her brother. Ragnvald and the armies of Hakon and Harald depart for Hordaland in order to gain control of the territory. There Ragnvald is bitten by a young boy he captures. Svanhild makes it to Kaupanger and is almost robbed, but she is saved by a woman named Gerta who helps her find passage on a merchant ship. While Svanhild is in Kaupanger, Ragnvald attacks King Gudbrand's hall with Hakon's men.

While sailing, Solmund, the merchant who owns the ship, tells Svanhild a story about trading at Tafjord in the past when Hunthiof was crazy and his hall was filled with horrors which makes Svanhild feel sorry for Solvi. A few days later, Solvi's dragon ship catches Solmund's ship. Svanhild offers herself as a trade for the safety of the merchant ship and engages Solvi in a battle of wits, which impresses everyone around them. Solvi takes Svanhild and leaves Solmund's ship safe.

Ragnvald is feverish from the boy’s bite as he, Oddi and Heming are sent with King Harald to march to King Eirik's fortress farther in the Hordaland and lay siege to it. King Gudbrand's forces assemble to the south of where Harald's forces are camped. In his weakened state, Ragnvald comes up with a plan that Harald decides to follow. Ragnvald fights with Harald's forces and is hit in the head while trying to protect Harald. He is found the next day and Ronhild, Harald's sorceress mother, is able to cure his infection and save his life.

Svanhild and Solvi arrive back in Tafjord and are married. That night, Svanhild rejects Solvi and he tells her that they can get a divorce at the gathering next spring Svanhild awakens the next morning and begs Solvi to take her to Yrjar where Ragnvald is but he says no.She eventually convinces him to let her go with them. On their journey, Svanhild tries to start loving Solvi.

Meanwhile, Ragnvald is recovering and he advises Guthorm and Harald on how to possibly defeat King Eirik. They eventually force him to come out and make a truce. Harald wants to marry his daughter, Gyda, but she tells them that she only wants to marry a true king of Norway. Harald promises her that he will not cut or comb his hair until he is the king of all of Norway.

Svanhild and Solvi continue sailing and they eventually end up in Dorestad in Frisia, which is ruled by a man named Rorik. Rorik's wives give Svanhild advice on how to get him to make him truly love her. Solvi convinces Rorik to be his ally against Harald, provided Solvi can find other allies. Svanhild shows Solvi that she accepts him and they form a closer bond.

Ragnvald and Hakon's force travel to Vestfold to spend the winter at Harald's hall. Tensions between Heming and Harald's trusted friend Thorbrand rise. One night, Harald tells the story of how Svanhild enchanted Solvi on the merchant ship. This story shocks and angers Ragnvald. Harald also tells Ragnvald that he wants him as his sworn man one day. The day before Yule, Harald organizes a day full of games and the last game is a race over the ice that covers the harbor that Ragnvald almost beats Harald in.

Svanhild and Solvi sail to find King Gudbrand. Svanhild tells Solvi that she is pregnant and that she wants to keep the child safe from war. They find Gudbrand who welcomes them and agrees to join the rebellion against Harald. Solvi takes Svanhild back to Tafjord and when he returns again Svanhild makes him promise that he will try not to kill Ragnvald.

At Vestfold, Thorbrand and Heming have a duel where Thorbrand is killed. Harald is furious and holds Heming captive. This leads to a rift between Hakon and Harald. Harald wants to kill Heming and Hakon wants his son returned. Ragnvald is appointed as judge to find a solution but neither side likes his fair solution. He insults both kings, saying they should be more reasonable causing Harald to dismiss him from the court.

Ranvald, Oddi and twenty men loyal to Ragnvald sail to Ardal to defeat Olaf. The force easily defeats Olaf’s farm boys. Ragnvald also easily defeats Olaf and cuts off his head. Ragnvald and his men stay at Ardal for some time until a messenger from Heming comes to them to ask if they would want to attack Solvi. Ragnvald agrees to and leaves his stepbrother Sigurd in charge of the farm.

The men sail towards Tafjord, stopping near Alesund to wait for the tides to align just right so they can sail to Tafjord. While they are waiting, they spy a fisherman who turns out to be Agi, the fisherman who rescued Ragnvald. Agi’s appearance and information about Solvi makes Ragnvald convince Heming and Oddi to chase Solvi instead of sail to Tafjord. They sail over the dangerous open ocean after Ragnvald makes a sacrifice of gold to the sea goddess Ran. A storm comes upon the ships that night but luckily all of the ships survive. They are then able to follow behind Solvi’s ships on the way to Vestfold.

Ragnvald and his ships help Harald overwhelm Solvi’s forces. Ragnvald tries to capture Solvi but Svanhild tricks Ragnvald into catching her ship by pretending to be Solvi. They return to find Heming has been captured. King Hakon arrives a day later and informs Ragnvald that Solvi is willing to trade Heming for Svanhild. Harald and Ragnvald eventually agree to the trade. During the trade, Harald outlaws Solvi from Norway and says that any man can kill him without consequence. Ragnvald realizes that Ronhild’s prophecy that he will lose a lot for Harald is already coming true.

More summaries and resources for teaching or studying The Half-Drowned King.