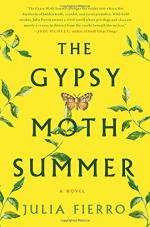 This detailed literature summary also contains Quotes and a Free Quiz on The Gypsy Moth Summer by Julia Fierro.

The following version of this book was used to create the guide: Fierro, Julia. A Gypsy Moth Summer. 2017, St. Martin's Griffin.

Leslie Day Marshall and her black husband, Jules, move back to Avalon Island with their two biracial children, teenage Brooks and four-year-old Eva. Their presence surprises the islanders as they are white and conservative and Jules is the sole black man. Jules is uneasy in the crowd and keeps losing Leslie and she moves from one white, blond woman to another.

Dom and Maddie pour water on their mother to wake her in time to prepare for their grandparents’ arrival. Ginny’s parents, Veronica and the Colonel, are both critical people and their motive for returning to Avalon Island is unknown. At lunch, the LaRosa family is surprised that Veronica talks back to her husband. This is due to the Colonel’s weak memory and general deterioration because of old age. Ginny tries to impress her father and win his approval, but Veronica knows this is pointless as they were never good parents to her. The couple has returned to Avalon because Veronica has cancer, but she also wants to keep an eye on the Grudder factory as Bob (the Colonel) was a Grudder higher-up. Also, a vandal has been tagging important Avalon monuments with slurs and accusations that the factory is polluting the island and causing cancer.

At the Castle, Jules’ family’s new home, he falls in love with the lush gardens and intricate maze leading from the property. He and Leslie had a community garden in the city that was destroyed, and this is his second chance. Brooks and Leslie had been adamant about moving to the island and Jules finds it impossible to hate the foliage. As the caterpillars and moths infest the island, Jules becomes obsessed with ridding the pests from his garden, spending all of his time there. Jules studied Landscape Architecture at Harvard where he met Leslie. Jules’s late father had always warned him about white women and disowned him when he married Leslie just as Leslie’s parents rejected her entire family for marrying a black man. Jules had attended primarily white private schools growing up as his mother loved working as a maid for rich whites who offered to pay for his schooling. Throughout the novel as Jules begins to wonder Leslie’s true intentions for moving back to Avalon Island, his father’s voice is a recurring presence that continuously warns about the dangers of the islanders.

Jules’s son, Brooks, falls in love with Maddie Pencott LaRosa, a poor east end girl with roots in the west side. Although Veronica and the Colonel left their large estate, White Eagle, abandoned for many years, Maddie’s family is only allowed to stay in White Eagle’s small cottage off to its side. The estate neighbors the Castle, and Brooks invited Maddie, Penny, all of their new friends, and Maddie’s west side cousins to party in the ballroom that they call “Neverland” every night. As the parties continue, they become more reckless. The teenagers paint over the beautiful walls with black spray paint, and Maddie must come to terms with the fact that Brooks is the island’s vandal. At one party, someone ties a rope to the ballroom chandelier and a boy swings off of it from the second floor. Towards the end of the novel, Penny, Maddie’s best friend who grows more hapless due her terminal brain cancer, also swings from the rope. It is not clear as to whether or not this is a suicide attempt, but she does not hit the bean bags once she lets go of the rope, twisting her leg at an odd direction and sending her to the hospital in critical condition.

Later on, Maddie’s west side cousins arrive to the Castle and accuse Leslie for ratting them out, although that was not her intention. She had employed them to vandalize the town as the Grudder war plane factory has leaked poison into the general population for years and she wants them to come clean. Vinny, one of Maddie’s cousins, has a gun and Jules grabs one, as well, prematurely firing at Vinny, though not killing him. The pollution from the factory is responsible for both the high number of cancer cases on the island and the mainland, as well as infertility and pregnancy issues like Leslie had.

A character who takes up little of the novel but has a big impact is Maddie’s little brother, Dom. Tortured by kids at school and forced to perform a sexual act on his best friend, Dom experiences his first homosexual feelings while coping with the fact that his best friend, Maddie, would rather party and meet with Brooks than spend time with him. The children’s father is physically abusive and their mother takes pills, so this loss is detrimental to Dom. Taking advice from his grandfather, the Colonel, Dom realizes that he is at war and mush destroy his enemy who, in this case, is Brooks. The Colonel teaches Dom to shoot, and at the very end of the novel, Dom shoots Brooks and he dies. Wanting to protect her grandson and terminal, anyway, she shoots her husband in the back of her head and then commits suicide so no one will know that Dom killed Brooks. It is not known what happens to Maddie after this, but the island in general tries to forget the unfortunate events, pretending like they never happened.