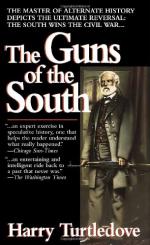 The Guns of the South: A Novel of the Civil War Summary & Study Guide

Harry Turtledove
This Study Guide consists of approximately 27 pages of chapter summaries, quotes, character analysis, themes, and more - everything you need to sharpen your knowledge of The Guns of the South.

The Guns of the South: A Novel of the Civil War Summary & Study Guide Description

The Guns of the South: A Novel of the Civil War Summary & Study Guide includes comprehensive information and analysis to help you understand the book. This study guide contains the following sections:

This detailed literature summary also contains Topics for Discussion on The Guns of the South: A Novel of the Civil War by Harry Turtledove.

The Guns of the South by Harry Turtledove is a novel about the Civil War, but it is not the average Civil War novel. In this book, the events of the Civil War take a turn when a group of men from one hundred fifty years in the future appear and offer their services to the Confederacy. In addition to their services, they also offer to supply a fantastic new weapon and ammunition at an unbelievable low price. The new repeater carbine is an AK-47.

The novel opens with Lee at his headquarters near Orange Court House, Virginia. The South is ill-equipped and cannot match the Springfield repeater guns of the North. Their casualties are high and they are in danger of losing the war. Colonel Gorgas writes General Lee suggesting he view a demonstration of a new weapon. The man who does the demonstration is named Andries Rhoodie and he has a strong accent that Lee and others cannot identify. The gun that Rhoodie demonstrates greatly impresses Lee and the soldiers who agree to allow Rhoodie to supply the Confederacy. The first shipment of guns and ammunition is to be shipped from Rivington, North Carolina and arrive the next day.

That night, Broodie eats with them. He introduces them to rations in silver foil packets that are mixed with water and to Folger Instant Coffee. He tells them that AWB is the emblem for the organization he represents but fails to say what it is or where the products come from.

The next day, the weapons arrive as Rhoodie promised along with some of his men who begins to train the soldiers on the use and care of the AK-47s. The Confederate soldiers soon use the weapons in combat against the North and the tide of the Civil War changes as the Confederates win victory after victory. Eventually the Confederate troops enter Washington city and capture the White House and Abe Lincoln. An armistice is negotiated and the war ends, with the Confederacy being the victor.

Lee finally presses Rhoodie for information about where his intelligence comes from Rhoodie always seems to know what Lee's plans are as well as those of the United States. Rhoodie finally tells him that he and his men all from one hundred fifty years in the future and they have come to help the Confederacy win the war to make the world a better place in the future. The AWB men are racially motivated and their hatred of blacks is obvious.

After the war, when Lee becomes President of the Confederate States of America, the AWB men try to assassinate Lee at his inauguration. The Confederate authorities gain access to the AWB office and their collection of books about the Civil War. They learn that the AWB men are part of a small radical movement called the Afrikaner Resistance Movement from the future. The books reveal that future generations do not view the institution of slavery in the way the AWB people claim they did.

Turtledove writes an interesting book that holds the reader's interest and is easy to read.

More summaries and resources for teaching or studying The Guns of the South: A Novel of the Civil War.

The Guns of the South: A Novel of the Civil War from BookRags. (c)2022 BookRags, Inc. All rights reserved.