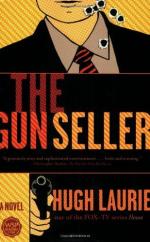 Hugh Laurie
This Study Guide consists of approximately 39 pages of chapter summaries, quotes, character analysis, themes, and more - everything you need to sharpen your knowledge of The Gun Seller.

This detailed literature summary also contains Topics for Discussion and a Free Quiz on The Gun Seller by Hugh Laurie.

The Gun Seller by Hugh Laurie is the story of an Englishman named Thomas Lang. It begins when Thomas Lang is asked to assassinate a man. Despite his attempts to distance himself from the situation, Thomas gets pulled into the center of a conspiracy so convoluted that he has no idea who to trust or how to get out alive. Thomas soon finds that he must choose between doing the right thing, which will most likely end in his death, or condemn others to death in order to save himself.

Thomas Lang, a retired British military man, is approached with a request to preform an assassination on a man named Alexander Woolf. Lang refuses and decides to go and warn Mr. Woolf that his life is in danger. Lang meets Woolf's daughter, Sarah Woolf, and tells her about what he knows although she is skeptical. Lang returns home but is soon fetched to the Ministry of Defence by an old military friend of his named David Solomon. Once they are at the Ministry of Defence a man named O'Neal accuses Lang of conspiracy to murder. Lang can't tell them anything solid about the man that had approached him for the murder but they let him go with the understanding that they are going to have someone following him.

Lang sees the man following him that had tried to get him to agree to the assassination of Mr. Woolf. Lang is able to back track and discretely follows the man to the work place of Sarah Woolf. Lang attacks the man and is shot by Sarah Woolf who explains that this is her father. Lang isn't badly hurt and soon goes home. Alexander Woolf calls Lang and asks that he have lunch with him. Woolf explains at the meeting that there is a helicopter, called the Graduate, that is a prototype and gun sellers are trying to get the government to buy it but need it to be openly tested in a terrorist situation to prove that it is viable. Since they need to know when and where to test it the gun sellers are creating the situation they need. Lang is unconvinced but agrees to think about it.

When Lang heads home he is ran off the road and kidnapped. He is able to get free but before he can escape the building Alexander Woolf, who had been kept a few rooms away, is shot and killed. Lang begins to look into the things that Woolf had told him and finds that Woolf was telling the truth. The American CIA is involved headed by a man named Russell P. Barns. Barns kidnaps Lang and takes him to the financial force behind the Graduate named Naimh Murdah. Murdah is holding Sarah Woolf hostage and says he will kill her if Lang doesn't do what they ask and ensure that they have a group of terrorist to test the Graduate on. Once the Graduate is successfully tested the Pentagon will supposedly sign a large contract for the helicopters that will result in large amounts of money for those backing it. Lang reluctantly agrees to save Sarah.

Lang is inducted into a group called the Sword Of Justice. The Sword Of Justice goes to Casablanca and takes a building hostage. The faction believes they are freeing their fellow freedom fighters and know nothing of the Graduate. At the last moment Lang is able to take Murdah hostage and hold him on the roof while the Graduate flies in. Armed with a Javelin British surface-to-air missile, Lang is able to take out the Graduate with Russell P. Barnes behind the wheel. After the situation is resolved the sales of the Javelin go up more than forty percent.

More summaries and resources for teaching or studying The Gun Seller.