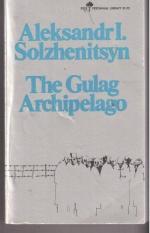 This detailed literature summary also contains Topics for Discussion and a Free Quiz on The Gulag Archipelago, 1918-1956 by Aleksandr Solzhenitsyn.

The Gulag Archipelago, 1918-1956 by Aleksandr I. Solzhenitsyn describes in detail the physical and psychological horrors inflicted on millions of political prisoners in the Soviet era.

Soviet State Security prefers to arrest people when they are disoriented, preferably at night using massive force, but one never knows who one's captor will be, when or where it will happen. However it does, one enters a great human "sewage disposal system." There have been various waves of arrests, but those in 1929/30 and 1944-46 are usually overlooked in light of Khrushchev's revelations about "abuses of the cult" and the purges of 1937/38. Neither the 15 million peasants who disappear in 1929/30 nor the entire nations and POWs that vanish 1944-46 leave written records, but those who perish in the era of the great show trials leave plenty.

After a brutalizing arrest comes a more brutalizing interrogation, which is not intended to determine guilt or innocence, but to prepare the captive for inevitable incarceration. The inflictors of physical and mental torture are known as "Bluecaps." Except for the splash of color that dates back to Tsarist security police, they have nothing in common. Their brutality harkens back to the Inquisition and shares the same kind of ideological focus to achieve desired results. After being disoriented and broken in solitary confinement, prisoners are happy to enter their first cell, thereafter remembered as their "First Love." Here friendships are formed, stories heard, and survival skills learned. In the spring of 1945, as the Red Army crushes the Nazi empire, prisoners hope for amnesty, but instead, POWs and émigrés pour into the Gulag system.

Freed of Western concepts of justice and truth, Soviet law struggles to find a proper socialist footing in which motive and action are equally criminal. OSO tribunals bypass formal trials to expedite getting political prisoners into the system—or shooting them. The Criminal Code of 1926 makes "big, coordinated, well-organized" show trials possible, and Vyshinsky and Krylenko deal with "wrecking" engineers, churchmen, non-Bolshevik rivals, and finally Stalin's real and perceived enemies by purging the Communist Party. Social and political expediency alone determine guilt. Capital punishment experiences ups and downs, but is exponentially more common than under the Tsars—some 1.7 million executions by 1 Jan. 1939. After the war, Stalin leans towards more socially useful 25-year sentences. Early in the Soviet era, the prisons that are emptied of political prisons in 1917 re-fill with inmates who know the humane pre-revolutionary "prison regime" and battle to keep its privileges. Allowing themselves to be crushed dooms all later political prisoners to the horrors of the Gulag, which begins in 1923, as former monasteries in the isolated Solovetsky Islands on the White Sea become camps.

The Gulag is in perpetual motion, as millions of inmates are whisked about in Black Marias and "Stolypin" train cars between interrogation and staging for transportation to a camp. Red cattle trains crisscross the USSR bringing unfortunates to camps—or they arrive, equally miserable, by water or on foot. The 80% given general assignment jobs inevitably perish. Common criminals prey on the naïve political prisoners. Still, zeks enjoy each other's company and stories, as a postwar generation emerges, unwilling to be swallowed in the system.