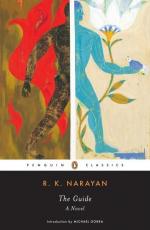 Get The Guide from Amazon.com
View the Study Pack
View the Lesson Plans
Study Guide
Order our The Guide Study Guide

Related Topics
Swami and Friends
The Painter of Signs
Mr. Sampath: The Printer of Malgudi
A Tiger For Malgudi: A Novel
The Financial Expert
Waiting For Mahatma: A Novel

R. K. Narayan
This Study Guide consists of approximately 38 pages of chapter summaries, quotes, character analysis, themes, and more - everything you need to sharpen your knowledge of The Guide.

The Guide Summary & Study Guide includes comprehensive information and analysis to help you understand the book. This study guide contains the following sections:

This detailed literature summary also contains Topics for Discussion and a Free Quiz on The Guide by R. K. Narayan.

R.K. Narayan's novel The Guide is the story of a man named Raju who comes from a small village in India called Malgudi. Malgudi itself does not exist. This fact gives Narayan's novel the feeling of a fable or fantasy. Raju's life is predicated on a series of self-deceptions which eventually lead the character down a road of confusion, loss of self and then to spiritual transformation and awakening.

Throughout Raju's life, he does his best to be whatever people require him to be at any given moment. When he runs a shop in the Malgudi train station, he is "Railway Raju," an extraordinary guide and procurer of all things needed. When Raju meets a beautiful dancer named Rosie, he becomes her lover and her guide as well by helping Rosie realize her wish to dance professionally. When Rosie becomes famous, Raju then becomes "Raj," a man of influence and elevated social standing. This does not last very long, however, and Raju eventually ends up in prison. While incarcerated, Raju again works his chameleon magic, whereby he becomes well-known and well-liked. However, Raju never seems to understand the lesson life wishes for him to learn.

After being released from prison, Raju finds himself wondering what to do with the rest of his life. Raju has no desire to return to Malgudi to face gossip and rejection. He hides out in an abandoned temple on the banks of the Sarayu River and buys himself a little bit of time. One day, a man named Velan appears at the temple and through a series of conversations, Velan comes to regard Raju as some sort of a holy man. Finding the situation beneficial, Raju plays along with the ruse. However, there comes a day when, due to some rather comical miscommunications, Raju is forced to reveal the truth about who he is and where he comes from. Raju believes that this act of disclosure will free him from playing the part of the accidental swami, but it has just the opposite effect.

Sitting in the ancient temple on the riverbank, Raju's final incarnation is that of "Swamiji." Raju's metamorphosis occurs when he is finally able to release his need to be all things to all people. He comes to an understanding of what it means to serve others selflessly. His entire life, Malgudi, Rosie, money and fame, all fall away until finally, Raju is left with nothing but the essence of himself as just another man. It is at this point that Raju becomes the saint he has been playing all along. Raju's deceptions prove valuable after all, as he eventually acts his way into his true self, finally becoming able to sacrifice himself willingly in order to restore hope to the lives of others.

More summaries and resources for teaching or studying The Guide.

The Guide from BookRags. (c)2022 BookRags, Inc. All rights reserved.