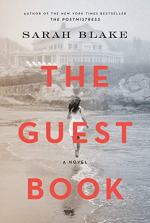 Sarah Blake
This Study Guide consists of approximately 50 pages of chapter summaries, quotes, character analysis, themes, and more - everything you need to sharpen your knowledge of The Guest Book.

This detailed literature summary also contains Quotes and a Free Quiz on The Guest Book by Sarah Blake.

The following version of this book was used to create the guide: Blake, Sarah. The Guest Book. Flatiron Books, 2019.

Blake’s novel is divided into 45 chapters, spanning three generations of the Milton family. The work begins in the 1930s, capturing Kitty and Ogden’s charmed life as an affluent family in America. However, early on in the work, tragedy strikes and the Milton’s oldest son Neddie dies from a fall out of their New York apartment window. In order to alleviate Kitty’s grief, Ogden buys an island off of the coast of Maine: Crockett’s Island. The Island provides for a reprieve from the outside world, and lends itself to entertaining the upper echelon of America. The plot revolves around the Island, as it is symbolic of the Milton values and privilege.

Interspersed among the chapters describing Ogden and Kitty’s charmed life, is the third person narrative of their granddaughter Evie’s contemplation of how to keep the Island in the family, two generations later. Milton and Kitty’s eldest daughter, Joanie, Evie’s mother, has passed away and the Island has been left to Evie and her cousins. Set in present day, Evie’s narrative reflects on what the Island has represented to the family over the years. However, the once-privileged lifestyle of the WASP regime has deteriorated over time, and The Island has fallen into disrepair requiring a substantial amount of upkeep. Evie and her cousins debate the Island’s fate.

Kitty Milton is at the center of the initial plot line, and she endeavors to support Ogden as dictated by the rules of decorum of the wealthy class. Bloodlines and good breeding are everything, so when she is asked to keep a Jewish boy, the son of one of Ogden’s acquaintances, she refuses for a myriad of reasons. Additionally, Ogden appears to be in business with a German steel company that may have Nazi ties during the 1930s. Kitty and Ogden’s three children also have their own stories ensconced within the work and framed by the expectations of growing up surrounded by wealth and privilege. Moss is an idealist who hopes to be a musician, Joanie is compromised in terms of marrying well given her epilepsy, and thus Evelyn ends up carrying the familial torch and legacy. Moss befriends a black man, Reg Pauling, and a Jewish man, Len Levy, each with their own stories of life in America during a time of prejudice. Joan and Len have an affair, but Len’s background serves prohibitive in terms of a union. Unbeknownst to Evie, however, the two do conceive a child, and that child is her.

Evie is a history professor in the midst of middle age, trying to ascertain why she feels it is imperative to keep the Island, despite her husband’s opinion that she should let it go. Her mother Joanie, a cryptic and silent woman while Evie was growing up, has left her with unanswered questions. Evie slowly reveals her family’s history through photographs and mementos left behind on the Island, her grandmother’s surprising request concerning her uncle’s share of the Island, and a visit from a man who is soon to be revealed as her half-brother, Charlie Levy. Charlie has rented the Big House on the Island, in part to fulfill his own dying father’s request to bury something on the Island.

As the work comes to a close, it is revealed that the night Len and Joan conceive Evie, Kitty and Ogden held a great party to celebrate Evelyn’s impending marriage. The usual blue blood crowd was in attendance, but on a lark, Moss had invited Len and Reg. The two are met with a polite tolerance as decorum dictates. However, when Joan suffers a seizure while down on the beach alone with Len, chaos ensues. The veneer of good breeding slips and Reg and Len become acutely aware that they are perceived as inferior outsiders, merely guests allowed to attend through the graciousness o those who own the world. The two depart from the Island, and Moss is crestfallen as his idealistic hopes for the future are dashed. In his fury and frustration, Moss rows to his death, marking another great loss for Kitty. Moss’s parting wish was for Kitty to make amends with Reg and Len, which she does years later as she bequeaths Moss’s share of the Island to Reg Pauling.

Ultimately, Evie finds some resolution and reconciliation on the Island, as she learns of her identity, as well as the importance of uncovering history, both that of family and humanity.

More summaries and resources for teaching or studying The Guest Book.