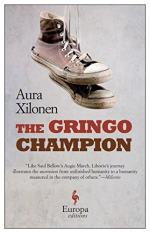 Aura Xilonen
This Study Guide consists of approximately 90 pages of chapter summaries, quotes, character analysis, themes, and more - everything you need to sharpen your knowledge of The Gringo Champion.

This detailed literature summary also contains Quotes and a Free Quiz on The Gringo Champion by Aura Xilonen.

The following version of this book was used to create this guide: Xilonen, Aura. The Gringo Champion. New York: Europa Editions, 2017.

The novel begins in an unnamed southwest American city with its narrator, Liborio, a teenage Mexican immigrant living illegally in the United States, engaging in a street fight with two men across the street for the bookstore where he works. Liborio takes down both men easily, and it is revealed that his motive for fighting them was to defend the honor of a girl he is in love with who he refers to as the chickadee. He returns to the bookstore where the chickadee comes and finds him to tell him she can take care of herself.

The next day the bookstore is vandalized and Liborio’s boss, Jefe, sends him out to go tell his wife. While Liborio is waiting for the bus, he is jumped and left beaten and bloodied in the street. Two different people, a man named Mr. Abacuc and a woman in a truck, try to help him, but he refuses their offers. Liborio goes to retrieve his boss’s wife, and when they return to the bookstore they cannot find Jefe anywhere. His wife decides to call the police, but tells Liborio he should run away and lay low for a few days so he does not get questioned and deported when the police arrive.

Liborio spends his first night in a park where he is beaten and robbed by two security officers. The next morning the chickadee finds him in the park and helps him out, giving him some food before she has to go back to work. Liborio later goes to her apartment to thank her, but finds only her sick grandfather there, who tells him her name is Aireen. After he leaves the apartment, he is promoted by a man named Chuby John who hires him as a sparring partner for a boxer he is promoting after seeing a video online of Liborio taking a beating from the other day. Later that night, Liborio breaks into the vacant bookstore to sleep up in the loft.

The next day Liborio goes to Chuby John’s boxing gym, where he spars against his boxer, Crazy Loco, and shatters the boxer's wrist in the process. During the ensuing chaos, Liborio runs away and goes back to Aireen’s, waiting outside her house for her to get home from work. While he is waiting, he is approached again by the woman in the truck from the other day. He reluctantly gets into her car and she takes him to her house in outside of the city where she helps him get cleaned up and gives him new clothes to put on. Liborio discovers she is the one who filmed and posted the video of him getting beat up on the internet, and that she is a reporter who covers the immigrant community in the city and wants to get an interview with him for CNN. Realizing he is being taken advantage of, he runs away from her and back into the city.

Aireen finds Liborio the next morning and takes him to her apartment to get cleaned up. A friendship begins to form between them. Aireen is able to get her building supervisor to give Liborio one of the rooftop apartments in exchange for menial labor around the building. The next day Aireen takes Liborio to the mall and tries to buy medication for her grandfather, but she cannot afford it. She steals it instead, and Liborio helps her escape from the security guards. When they both get out to the parking lot they hug, and he tries to kiss her. She rejects his advances and he passes out.

When Liborio regains consciousness, he finds himself in a shelter called the Bridge House for children who cannot take care of themselves. He meets a young girl named Naomi who he quickly befriends. He then discovers Mr. Abacuc is the man who runs the shelter. After learning from a note that Aireen does not want to see him anymore, Mr. Abacuc and another man named Coach Truddy introduce Liborio to boxing to help him with his anger issues. As he begins his training as a boxer, his life becomes more structured and he learns self discipline, even taking the initiative to start a library at the house with Naomi. He also returns to Aireen’s house and discovers the note she had supposedly left for him was a forgery written by someone else. After three days of training he participates in a charity fight for the shelter in which he easily wins both of his matches, actually hospitalizing several of his opponents.

Meanwhile Wendoline, the reporter, as a way of apologizing for her behavior, has been writing articles promoting both Liborio andn the shelter. This notoriety brings many donations to the Bridge House. Liborio gets a new coach, Mr. Bald, who was his opponent's coach from his first charity tournament. Under Mr. Bald’s coaching, Liborio becomes even more disciplined and his life gains more support and structure. With the money he wins from his first fight, he buys a bottle of medication for Aireen’s grandfather as a gift to her. She thanks him and the two spend the day together before Liborio accidentally insults her and the two stop speaking again.

Liborio attempts to get back into Aireen’s favor, but in the ensuing weeks she is nowhere to be found while he writes letter after letter for her and slips them under her door. He also discovers that Jefe has been fine all along, and that he is renovating the bookstore with money from an insurance policy he purchased weeks before the shop was vandalized. Meanwhile, Liborio trains for his next fight with Mr. Bald, and on the day of the fight Jefe shows up and tells him there is a black ribbon on Aireen’s front door. Liborio beats his opponent in a matter of seconds in the first round and rushes off to Aireen’s house. He finds the funeral has just started. Aireen thanks him for coming and thanks him for all the letters, however Liborio sees that she is there with another man named Alexaindre. After the funeral she tells him she will never forget him before he goes back to the shelter. Back at the house, Liborio talks to Mrs. Merche, who makes him promise never to hurt Naomi. The novel ends with Liborio waking up the next morning to Naomi in his room, telling him all about the book she has been reading.

More summaries and resources for teaching or studying The Gringo Champion.