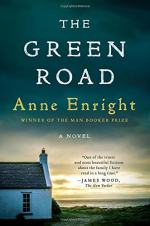 This detailed literature summary also contains Quotes and a Free Quiz on The Green Road by Anne Enright.

The following version of this book was used to create this study guide: Enright, Anne. The Green Road. W.W. Norton & Co, 2015.

The Green Road is Anne Enright's novel about a family from County Clare Ireland. The novel traces the falling apart and coming together of Rosaleen Madigan and her four children, Dan, Emmet, Constance, and Hannah. The novel is told in past tense, third person and it is split into two sections: Part I covers the children leaving their home in Ireland and the lives they attempt to build for themselves. Part II covers the children coming home to the family land, Ardeevin, when Rosaleen decides to sell it.

The novel opens with Hannah at 11 years old, when Dan told the family he wants to become a priest. Their mother Rosaleen (who was not yet named in the narrative) took to her bed while Hannah accompanied her father to his family's farm to kill a chicken for Easter Dinner.

The narrative then moved ahead in time, to the early 1990s, when Dan was living in New York city. Dan had not become a priest, and instead he worked first as a shoe salesman and then as an art gallery assistant. Dan took up with a gay man named Billy, but had trouble admitting his own sexual identity. He told Billy he would be getting married, but continued to sleep with Billy. After their affair, Dan went back to his girlfriend Isabelle, and he did not come to see Billy when he went into the hospital because of AIDS.

Years after Dan was in New York, the narrative turned to Constance living in County Clare not far from her mother. She found a lump in her breast, and the narrative followed her experiences as Constance waited for her mammogram and received a clean bill of health. As Constance waited, she talked with another woman, Margaret, who was not so lucky. Constance returned home to discover that her husband had not actually forgotten about her test.

While his siblings found themselves, Emmet lived in Mali by the early 2000s working for a relief organization and trying to save people. Emmet was in a relationship with Alice, who took in a stray dog despite dogs being seen as unclean by the locals. When Alice went back home for a bit, Emmet allowed the dog to go back outside, and when Alice returned, the dog was poisoned. When Emmet did not respond sympathetically to her mourning, she left him.

The narrative then turned to Rosaleen, who was still living in her family home, without her children around her. As she wrote Christmas cards to her children, she revealed her relationship with each of them. Disgruntled and unsettled to be stuck on the first floor of her house, Rosaleen resolved to sell the home and move in with Constance.

In the second half of the novel, the Madigan children came home.

Dan was now living comfortably with a man named Ludo in Toronto. When Ludo convinced him to go back to Ireland while he can, he realized he loved Ludo and agreed to marry him.

Hanna, who lived in Dublin, was an out-of-work actress and mother of a new baby. She was also an alcoholic, and between putting herself in the hospital (because she literally fell down drunk) and allowing the baby to get ahold of her water bottle, which contained alcohol, her boyfriend took the baby and told her to go to Christmas alone.

Constance picked Dan up from the airport and took him to Ardeevin to see Rosaleen while she went shopping for Christmas dinner. But Christmas Eve did not go well, as old injuries revealed themselves and the children ended up angry at Rosaleen and with one another. When they went off alone to cool off, Rosaleen wandered off on her own to think about her past and her regrets in life. She fell and, injured, tried to find shelter.

Meanwhile, the siblings put aside their differences and came together to search for her. They found her in an old abandoned cottage, sore but okay.

Following Rosaleen's rescue, the siblings returned to their separate lives, but something had changed. They were not necessarily any more connected with each other, but facing their mother's possible death had helped them to break through problems in their own lives.

The novel ended with Rosaleen showing up at Emmet's apartment. She told him that Constance had kicked her out, but in reality, Constance had a diagnosis that required surgery and she could not take care of her mother. Rosaleen ended the novel by saying that she should have paid more attention.