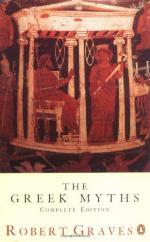 Robert Graves
This Study Guide consists of approximately 34 pages of chapter summaries, quotes, character analysis, themes, and more - everything you need to sharpen your knowledge of The Greek Myths.

This detailed literature summary also contains Topics for Discussion on The Greek Myths by Robert Graves.

This is a classic work designed to provide a thorough introduction to the pre-Christian religion of Greece. It has been rigorously translated and carefully compiled. The edition used as the source for the production of this book summary is The Greek Myths Complete Edition, edited by Robert Graves. This was a 1955 Penguin edition. There is a brief description of the famous writer Robert Graves. After this is a brief survey of a few aspects of the culture. One is the prevalence of the worship of Dionysus the deity, rather than the two city leaders of the same name: one the son of the other. Dionysus was often symbolized by the goat - which is a very effective, inquisitive and outgoing creature by nature. These animals were important to the culture as sources of milk, cheese, meat, and if necessary also thread and skins. They were economically important in the culture in which they have prevailed as a symbol. This is brought up during the introduction. The other main creature brought up in the introduction is the centaur. Famed for its association with the constellation and astrological sign Sagittarius, the centaur is an important amalgam of man and horse. While incredibly wise and brilliant compared to the horse, the centaur is rather recalcitrant by the standards of a well civilized man. The centaurs were known to worship Dionysus, and had a mixed reputation. To this day there are arguments about whether the centaur is actually simply a cavalry soldier or if it is somehow a fairy tale animal or symbolic of a location which has both men and horses.

From that point forward, the book consists of extensive translations of Greek myths. The extent of information available about this religion, which is what it really was, is greater than that found for many other of the pagan world's religions. Perhaps because it became associated with literacy early on, or thanks to the magic of translation and good publisher support, the ancient Greek mythology continues to influence the minds of hundreds of millions of people worldwide. Various subject matters are taken up and addressed through the use of these special stories. A myth is a religious story that is not viewed as being necessarily true, but is credited with having some insight and bearing into the truth. They are normally intimately bound up with both religion and culture. At the same time, as story, they are so inspiring that even after generations of nonbelievers, people still cling to these tales as somehow glorious marks upon the psyche of humanity as a whole.

More summaries and resources for teaching or studying The Greek Myths.