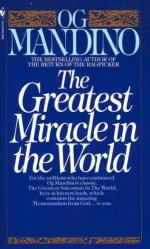 The Greatest Miracle in the World Summary & Study Guide

Og Mandino
This Study Guide consists of approximately 24 pages of chapter summaries, quotes, character analysis, themes, and more - everything you need to sharpen your knowledge of The Greatest Miracle in the World.

The Greatest Miracle in the World Summary & Study Guide Description

The Greatest Miracle in the World Summary & Study Guide includes comprehensive information and analysis to help you understand the book. This study guide contains the following sections:

This detailed literature summary also contains Topics for Discussion and a Free Quiz on The Greatest Miracle in the World by Og Mandino.

The Greatest Miracle in the World is a self-help book based on the true experiences of Og Mandino when he met a ragpicker who changes his life. This ragpicker, Simon Potter, was a kind man who spent his retirement going around helping people to see that they are part of the living dead and guiding them back into the world of the living. Og visited Simon on many occasions, learning a great deal from him until the day he found a package on his desk that had a farewell message on it. Og went to Simon's apartment only to find out that Simon never lived there. The Greatest Miracle in the World is a mystical story about the life-changing events in one man's life and the answers to how the reader may too change their own lives.

Og Mandino met Simon Potter one snowy morning while attempting to enter the parking lot near his office building. The gate would not stay up when Og tried to enter, so Simon came over and offered to hold the gate for him. Before Og could thank Simon, he was gone. It was not until spring when Simon was walking his dog that Og met Simon once more. Simon invited Og to his apartment where they shared a glass of sherry. Og discovered that Simon had interesting taste in literature by the books stacked in his apartment. Simon explained that each of those books had been written in some form by the hand of God.

On their next visit, Simon told Og about his life in Germany before the war, the deaths of his wife and only child, and his immigration and subsequent life in Chicago. Og found all this information eerie because it turned out that Simon's life closely resembled the life of the main character in a book Og has written, entitled The Greatest Salesman in the World. In this book, Og wrote about a man who wanted to become the greatest salesman in the world and quickly learned that generosity is what made a man a success. This man shared the same job that Simon held in Germany, which was the owner of a large import/export business, the same name of their spouses, and lived in the same town.

Og promised Simon he would allow him to read his book. A few weeks later, Og arranged for Simon to have his book, inscribing it with a touching dedication. Og discovered that he was excited about Simon reading his book and hoped that Simon would find it belonged in his stack of books that were written by the hand of God. Simon found that it did. Og soon had great success with his book and he attributed some of it to his friendship with Simon. Og got the great idea to co-author a book with Simon that would be a self-help type of book based on Simon's self-appointed job as ragpicker of down and out people. Simon told Og about a memorandum he once wrote after doing hours of research through his collection of books that he felt would inspire people to want to help themselves out of their low self-esteem related problems. Simon even suggested that Og might publish this memorandum in his next book, but Simon insisted that Og use the rules listed in this memorandum before publishing it. Og agreed.

Several months go by before either Og or Simon mentions the memorandum again. Simon has a birthday and Og brings him a glass geranium, his favorite flower, and they plant it out in Simon's window box so he will have a geranium that blooms year round. That night, before leaving, Og asked about the memorandum. Simon assured him he would have it soon. Og left on a promotional tour for his book and when he returned he found a package from Simon that was clearly a goodbye gift. Og rushed out of his office to Simon's apartment and found a strange woman there who knew nothing about Simon and who claimed to have lived there for four years. When Og cannot find Simon anywhere or anyone who knew him, he went back to his office to see what was in the package. Inside he found a goodbye letter and the memorandum from God. Og decided at Christmastime that year that he would write a book about Simon and the memorandum.

More summaries and resources for teaching or studying The Greatest Miracle in the World.

The Greatest Miracle in the World from BookRags. (c)2022 BookRags, Inc. All rights reserved.