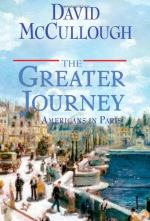 This detailed literature summary also contains Topics for Discussion and a Free Quiz on The Greater Journey: Americans in Paris by David McCullough.

There were outstanding institutions of study and learning. Charles Sumner left his budding law firm in Boston in exchange for the opportunity to attend the Sorbonne. After many years of learning and being exposed to the liberal culture in Paris, Sumner returned to America to become a US senator and one of the strongest voices and advocates for abolition. Many young American physicians, including medical student Oliver Wendell Holmes, came to Paris to study at a time when the city was considered the medical capital of the world. What the physicians learned in Paris had an important and lasting impact on the American medical world. During this time, Paris also had the world's top art school in the École des Beaux-Arts as well as the premier school of architecture.

The American artists who studied and lived there left a lasting legacy of their Parisian experience. George Healy barely had enough money to make the trip but ultimately became one of the foremost American portraiture artists of his era. Other American artists of note included sculptor August Saint-Gaudens and canvas artists Mary Cassett and John Sargent. Pianist Louis Gottschalk launched his musical career in Paris at age fifteen. American writers such as Ralph Waldo Emerson, James Fenimore Cooper, Nathaniel Hawthorne, Mark Twain and Henry James all were drawn to the city and spent varying amounts of time there. Even those individuals who did not stay for extended periods of time in the city always were lured back to visit again.

The young Americans who came to Paris struggled with homesickness and culture shock. Most did not speak French and very little English was spoken in Paris. In addition to these ordinary and expected stresses, many of the years between the 1830s and the end of the century saw Paris in political strife and unrest that eventually led to military conflict and a deterioration and partial destruction of the city. But after the conflicts settled down, Paris was able to enjoy a resurgence and once again become the European capital that was a draw to so many young Americans. One artist spoke of not having any money but it didn't matter because she was in Paris.