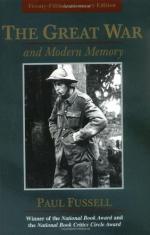 The book is written from the third person point of view. The author is clearly the narrator of the story, even though he uses quite a few quotations. The book is about the Great War but focuses on the British literature pertaining to the war, and Fussell does focus on British authors.

Fussell teaches English Literature at the University of Pennsylvania, so he is well qualified to write this kind of book. Instead of just looking at British writers, what he does is to look at the literature during periods of wartime. He ends up emphasizing the Great War, or World War I, and looks at how literature treated the war and changed with the war.

The intended audience is anyone who is interested in the Great War or in English literature.

The book is written in the third person with the narrator being the author. The...