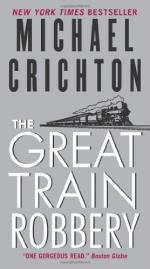 Michael Crichton
This Study Guide consists of approximately 22 pages of chapter summaries, quotes, character analysis, themes, and more - everything you need to sharpen your knowledge of The Great Train Robbery.

The Great Train Robbery is a novel by bestselling author Michael Crichton. The novel is a fictionalized telling of the true story of a famous train robbery in England in 1855. Edward Pierce is an apparent gentleman with a mysterious past who brings together a group of unlikely criminals in order to pull off the biggest lay of their time. With much planning and strategizing, Pierce pulls together the crime with finesse. This is a crime that should have resulted in a mystery on par with Jack the Ripper. However, the discovery of the unhappy girlfriend of one of the cohorts results in the arrest of everyone involved. On the verge of conviction, Edward Pierce disappears. The Great Train Robbery is written in the style of a documentary, giving a feel of reality to a novel that is both exciting and amusing, while leaving the reader curious enough to research the real crime on which the novel is based.

Edward Pierce watches as a man is thrown from a train. The man had attempted to steal gold headed to France to pay English soldiers fighting in the Crimean War. Pierce plans to do the same thing, but he plans to go about it in a much smarter way. Pierce enlists the help of Robert Agar, a screwsman, to help make copies of keys that will open the safes in which the gold is transported each month. To do this, Pierce must first learn the location of each key. An acquaintance, Henry Fowler, works for the bank that finances the payments and likes to brag about the importance of his job. One night, Fowler tells a group of gentlemen, of which Pierce is a part, that two of the keys are kept at the railway station, one is kept by the bank's president, Mr. Trent, and the last one Mr. Fowler wears around his own neck at all times.

Pierce and Agar stake out the railway station to try to figure out a way to make copies of the two keys kept there. At first it seems impossible because the office is always occupied during the day. Pierce suggests they do it at night, but Agar must break into the office between rounds of the local police, a time span of less than ten minutes. Agar suggests he might need the assistance of a snakesman, someone who could slip into the room and unlock the door and the cabinet where the keys are kept before Agar goes inside to copy the keys. Agar suggests a man named Clean Willy. However, Clean Willy is currently in prison.

At the same time Pierce and Agar are staking out the railway station, Pierce is watching Mr. Trent. Pierce needs to know where Trent keeps his key. After befriending Trent's employees he decides that Trent does not keep the key at work. However, Pierce cannot simply break into Trent's house to search it because there are too many places where a key might be hidden. For this reason, Pierce searches for a way to befriend Trent and finally bonds with him over a sport in which dogs are trained to kill rats quickly. Trent then introduces Pierce to his unmarried daughter, Elizabeth. As Pierce pretends to court Elizabeth, he continues to fish for information on the key and finally learns it is kept in the wine cellar.

Pierce and Agar break into Trent's house one night and search the wine cellar for the key. When they finally find it, Agar makes a careful copy of it and leave. A short time later, Pierce sets up Mr. Fowler with a prostitute whom Fowler believes will cure him of a veneral disease. While Fowler is with the girl, Agar makes a copy of his key as well. A short time later, Pierce helps break Clean Willy out of prison.

Agar manages to make copies of the two keys in the railway station. A short time later, a guard is paid off to turn a blind eye to Agar's actions on the train. Agar takes his copies of the keys and refines them, ensuring that they will open the safes on the day in question. However, before they can put their plan in action, Clean Willy goes to the police. Pierce is able to mislead the police, but when a case of wine is stolen off the same train that they plan to rob, the security is changed. The van in which the safes are located is locked at the train station and not opened until the gold is to be moved. Hence, Agar is disguised as a corpse and loaded onto the appropriate van to get access to the safes. Pierce must crawl across the top of the train to unlock the van from the outside in order to allow Agar to throw the gold overboard to a waiting accomplice.

After the successful robbery, the cohorts agree to wait two years to divide up the money. In the meantime, Agar is sent to jail for bad checks and his girlfriend is arrested for robbery. In order to get a deal and a lighter sentence, the girlfriend tells the police about Agar's role in the theft. Agar is questioned and eventually tells everything he knows. Pierce is arrested and the three men, Pierce, Agar, and the railway guard, are all put on trial. Pierce announces his intention to escape and a short time later, does exactly that.

More summaries and resources for teaching or studying The Great Train Robbery.