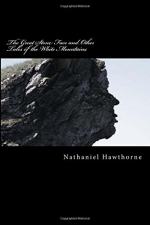 Nathaniel Hawthorne
This Study Guide consists of approximately 22 pages of chapter summaries, quotes, character analysis, themes, and more - everything you need to sharpen your knowledge of The Great Stone Face.

The story is set in an unnamed valley containing several villages and thousands of residents. One of the mountains bears a natural impression resembling a human face, known as the Great Stone Face. The valley is Ernest’s home and birthplace, as well as the birthplace of all of the story’s characters. The valley and mountain range may possibly be based on the White Mountains of New Hampshire, as the White Mountains once bore a natural, rocky impression resembling a human face, known as the Old Man of the Mountain.

As a boy, Ernest lives in a humble cottage in the valley with his mother. Ernest’s mother is affectionate and thoughtful, and Ernest seems to inherit these traits from her. As a boy and a young man, Ernest makes a living by working in the nearby fields. Ernest resides in the valley...

More summaries and resources for teaching or studying The Great Stone Face (BookRags).