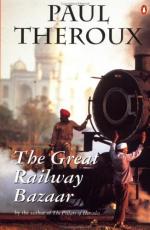 Paul Theroux
This Study Guide consists of approximately 35 pages of chapter summaries, quotes, character analysis, themes, and more - everything you need to sharpen your knowledge of The Great Railway Bazaar.

The Great Railway Bazaar: By Train Through Asia Summary & Study Guide includes comprehensive information and analysis to help you understand the book. This study guide contains the following sections:

This detailed literature summary also contains Topics for Discussion and a Free Quiz on The Great Railway Bazaar: By Train Through Asia by Paul Theroux.

The author plans a four month trip from London, through Europe and into Turkey, to Iran, Pakistan and India. He travels extensively in India and then flies to Rangoon, Burma. There he sees the Gokteik Viaduct and flies to Rangoon, Thailand, and takes rails all the way to Singapore. He makes a stopover in Vietnam and travels on some parts of the Trans-Vietnam railway. He travels extensively in Japan and after a sea voyage, takes the long Trans-Siberian Railroad back to Europe and London. He begins his journey in early September in London and travels to Paris, interrupted only by the English Channel ferry. After lecturing in Istanbul, the author heads to Lake Van on the more comfortable Turkish Railways. The author spends a couple days in Teheran before taking the train to the Iranian holy city of Meshed. There is no alcohol on this train, and most women are in veils; then the author spends a week in Afghanistan.

In Pakistan, there is the incredible Khyber Pass railroad that climbs through the mountains and arrives at Peshawar. From there the author goes to Lahore, a city of women in veils. After a couple of cab rides the author reaches Amritsar, India. The author takes a train to Delhi and then a train to Simla takes him to the foothills of the Himalayas. In Bombay and Jaipur the author meets large groups of Indians engaged in traveling to various religious festivals. Then the author goes to Madras, traveling 1,400 miles south. The Tamils of Madras often speak English, but further south the people are near naked. After making it to Rameswaram, the author takes the ferry to Ceylon. He describes Ceylon as a desperate country. The author speaks at a literary conference with sumptuous meals in a food-short country. The author returns to India via Calcutta.

The author flies to Rangoon with the goal of crossing the Gokteik Viaduct in Northern Burma. Next the author flies to Bangkok, which continues as a sex tourism center, even after the American soldiers leave Vietnam. The author travels by rail to Nong Khai and takes a ferry to Vientiane, Laos. The author returns south on the 1,400 mile line through Kuala Lumpur, Malaysia, all the way to Singapore. The author next flies to Saigon, and has the goal of traveling on the bits and pieces left of the Trans-Vietnam railroad. American bases have turned into squalid refugee camps in December 1973. The author then flies to Japan and is somewhat dismayed by the swift, clean Japanese trains, which he likens more to airplanes. He contrasts the organized, polite behavior of most Japanese to their outbursts of drunkenness and popular shows combining pornography and murderous violence. The author travels from Sapporo, in the cold north, to Kyoto, the southern city known for its temples and community bars.

The author takes a ship from Yokohama to the Russian port of Nakhoda, to the Trans-Siberian railroad. On the first leg of the trip, to Khabarovsk, the author enjoys a very comfortable wooden sleeper car. Khabarovsk is shockingly cold, at 35 degrees below zero. On the next leg of the trip, the Rossiya, the author is surrounded by Russian speakers, drinks heavily and learns some Russian. The author ends his Russian trip by getting drunk constantly with the bribed head of the dining car, Vassily. The author proceeds through Europe and back to London.

The Great Railway Bazaar: By Train Through Asia from BookRags. (c)2022 BookRags, Inc. All rights reserved.