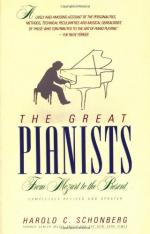 This detailed literature summary also contains Topics for Discussion and a Free Quiz on The Great Pianists by Harold C. Schonberg.

This work of historical non-fiction was published in 1963, and updated in 1987. The historical period covered runs from 1709 when the piano was invented and first played in the 1770s by Clementi and Mozart over three centuries to the late 1980s. Author Harold C. Schonberg presents a thoroughly researched introductory panorama of piano-playing and its great pianists. Schonberg sifted through letters, notes, memoranda, tales, old recordings, and discussions with aging musicians who once heard a great pianist. He filtered a huge amount of memorabilia to separate the tales from the truth of these great pianists' lives. In the beginning there was no recording equipment to keep a pianist's music alive. The author recouped an idea of their sound from letters and notes pianists and their audience or peers wrote. Until 1889 when a primitive cylinder recording was made there was no way to hear what the early pianists sounded like.

Schonberg wrote this book to "give an idea of the mainstream of piano playing" from Mozart to the present. The author of this historical title has accomplished the virtually insurmountable task of blending his rigorous objective research through centuries of ambiguous written data with his colorful, friendly, popular tone and style that can be appreciated by a casual reader. Schonberg writes as if he knew, listened to and spoke casually to Mozart, Liszt, Horowitz and Gould about piano music and their quirks despite only two of them being alive at first writing in 1963. Schonberg brings each pianist, dead or alive, to life in the pages of this book. A Boston Sunday Herald critic notes Schonberg wrote as if "direct from a concert...with the experience still fresh in his mind." He makes the story of these old and mostly dead pianists come alive and a pleasure to read.

The dry, confusing and centuries-old objective research evidence supporting Mozart and others life and times are fresh and enjoyable. Schonberg's encyclopedic presentation of musical piano and pianist development provides information over three centuries from the 1700s to the 1900s. Thirty-eight chronological chapters describe what, where and when great pianists lived. Descriptive Chapter titles offer an "at a glance" idea of what happened then and there. For example, a chapter titled "In the Beginning" describes when it began and another titled "From Ireland to Bohemia" denotes where, but the chapter titled "String-Snapper, Hands on High" piques the curious mind. Thirty-eight chapters are not many compared to the one thousand named pianists that Schonberg admits does not include everybody. This study guide condenses thirty-eight chapters into twelve sections by topic and pianist for easier comprehension. Schonberg's delightful writing style and the interesting lives of these pianists mitigates the challenging nature of this book about great pianists for the casual reader.