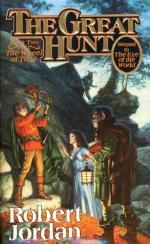 Robert Jordan
This Study Guide consists of approximately 43 pages of chapter summaries, quotes, character analysis, themes, and more - everything you need to sharpen your knowledge of The Great Hunt.

This detailed literature summary also contains Topics for Discussion and a Free Quiz on The Great Hunt by Robert Jordan.

The second book in the Wheel of Time series begins in Fal Dara, the capital city of the land of Shienar, on the edge of the Blight. Rand, Mat, Perrin, Egwene and Nynaeve have just returned from their journey to the Eye of the World, during which Rand destroyed the forsaken known as Aginor and grappled with the Dark One, Ba'alzamon. Rand's ability to channel the One Power, a force that allows one to manipulate matter and energy, has instilled in him a strong desire to leave his friends, both to protect them from what he might become once the taint left by the Dark One on the male half of the One Power has driven him mad and to protect himself by putting as much distance between himself and the White Tower as possible.

After a meeting with the leader of the Aes Sedai and Moiraine, Rand agrees to help retrieve the Horn of Valere, which has been stolen in a raid on the keep of Fal Dara. Rand's primary reason for pursuing the horn is that those who stole it also took the dagger that Mat Cauthon had removed from Shadar Lagoth. If the dagger is not found and returned to Mat, he will die.

While in Cairhein, Rand sparks a civil war, as various intrigues lead to the death of both the king and his chief rival. Padan Fain steals the horn and dagger back from Rand and enters a nearby Waygate, leaving a message for Rand that he will await him on Toman Head, a peninsula on the Almoth Plain. Rand uses the One Power to transport his party to the Almoth Plain, where an invading army from across the sea has pacified many of the villages and holds the city of Falme.

Nynaeve and Egwene journey to Tar Valon to begin their training in the White Tower. There they meet up with Min, who Moiraine had introduced to them when traveling through Baerlon. Egwene, after being made a novice, discovers a new friend in Elayne, the daughter heir of Andor, who is a novice as well.

Shortly after Nynaeve is elevated to the rank of Accepted, Liandrin, an Aes Sedai of the Red Ajah, tells her Moiraine believes Rand is in trouble on Toman Head and needs their assistance. Liandrin takes Nynaeve, Egwene, Elayne and Min through a Waygate to the Almoth Plain only to betray them to the Seanchan, the invaders from across the Aryth Ocean. Egwene and Min are both captured, but Nynaeve and Elayne escape.

Rand and his party sneak into Falme and find the horn and the dagger in the home of the Seanchan High Lord Turak. Rand kills Turak, but as they make their escape, Rand spots Egwene and feels he must try to rescue her.

Events come to a head as the Seanchan army converges on both Rand's party, and Nynaeve and Elayne, who have managed to free Egwene and Min. Attempting to flee Falme, both parties find themselves trapped between the Seanchan and an army of Whitecloaks, who have come to retake the city. Mat sounds the Horn of Valere, calling fighters from the Age of Legends to join them. They pledge their allegiance to Rand, who they recognize as the Dragon Reborn, and, flying the banner of Lews Therin Telamon, they help Rand's party destroy the Seanchan army. Meanwhile, Rand battles Ba'alzamon in the sky above Falme. He sustains a grievous wound but defeats Ba'alzamon and is rescued by Min, who gets him to Moiraine and Verin Sedai to be healed.

As the story comes to a close, Rand must face the fact that he is indeed the Dragon Reborn, and that news of his battle with Ba'alzamon in the skies above Falme, which was seen by the whole city, will be spread across the land.

More summaries and resources for teaching or studying The Great Hunt.