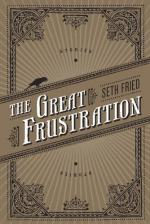 This detailed literature summary also contains Quotes and a Free Quiz on The Great Frustration by Seth Fried.

The following version of this book was used to create the guide: Fried, Seth. The Great Frustration. Soft Skull Press, 2011.

Seth Fried’s collection of 11 short stories in The Great Frustration examine desire and the corresponding frustration that results. He investigates the uniqueness of the human experience and the difficulties we face in understanding each other due to the subjectivity present in all our observations. He uses satire to convey these ideas, using a relentless, tongue-in-cheek humor to impart his messages.

Fried utilizes first person plural narration in “Loeka Discovered," "Frost Mountain Picnic Massacre," "Those of Us in Plaid," "The Siege," and "The Scribes’ Lament." Through his use of the collective voice, he includes the reader in the plight of the scientists that are having difficulty separating their affection for Loeka and their scientific findings. We are able to better feel the helplessness of the residents attending the annual Frost Mountain Picnic, as avoiding the picnic and ensuing massacre is impossible due to the social pressures and history. The reader sympathizes with the plaid workers, being subjected to relentless taunting from the Project Elects and forced to perform their less than desirable job of ensuring a monkey’s death. The residents of the besieged town include us in their plight, not seeing any other option other than waiting for the enemy to climb over the wall and take over their town. We are able to understand the scribes’ frustration at not being able to agree on a collaborative draft of Beowulf, their own opinions coloring a description that is uniquely their own.

Fried uses the personification of animals to explore his ideas in “The Great Frustration” and “ANIMALCULA: A Young Scientist’s Guide to New Creatures.” The animals in the Garden of Eden are unable to act in a way that feels natural to them, being forced into living in a paradise where no blood can be shed. They are unsure of their purpose and feel frustrated at being unable to act on their instincts and desires. The authors of the guide to fantastical microscopic creatures speak directly to their audience of young scientists, imparting their wisdom of not only the creatures, but of the nature of observation and life in general.

An unnamed narrator relates their personal story in “Life in the Harem, “The Misery Of The Conquistador,” “The Frenchman and Lie Down And Die.” The reader follows the story of an unattractive, male clerk suddenly forced into the king’s harem, made to moan for the king to imitate a release of desire. The conquistador relates his unhappy story, feeling pressured into a career he does not care for and regretting his accidental murder of a native woman. The narrator forced to play a French man in a culturally insensitive play as a child relates how it still haunts him to this day. He fears that his foreign, Dutch wife will find out about it and wonders if her opinion of him would change. Having witnessed multiple mysterious deaths in his family, the narrator in “Lie Down and Die” is hyper vigilant in noticing potential sources of danger. He continuously pictures his own death and wonders how things may have been different is his parents had escaped their respective fates.