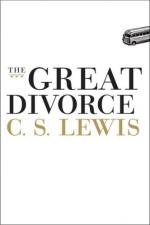 C. S. Lewis
This Study Guide consists of approximately 34 pages of chapter summaries, quotes, character analysis, themes, and more - everything you need to sharpen your knowledge of The Great Divorce.

This detailed literature summary also contains Topics for Discussion and a Free Quiz on The Great Divorce by C. S. Lewis.

The narrator suddenly finds himself in a dismal gray town just before nightfall. It's raining, and the narrator wanders around the dingy streets, looking for direction or at least a better part of town. He never encounters another person; it looks like the entire town is empty, but then he finds a bus station where people are waiting in line. For lack of anything better to do, he stands in line.

He listens to the conversations of others while he stands in line. They all seem discontent. They argue and shove. Finally a bus arrives. The narrator barely makes it onto the bus and feels himself very fortunate to have gotten a seat. The bus flies up into the cloudy sky, above the gray wet rooftops.

Before long the bus arrives in a sunny, grassy country. The scenery is more beautiful than the narrator has seen on earth. The bus passengers disembark, and the narrator notices that in the bright sunshine, the passengers appear to be transparent. He looks down and is horrified to see that he can see through his own feet. The new arrivals are ghosts, whereas the people they see in this new land are bright, opaque, and beautiful. Some of the ghosts are afraid and immediately return to the bus. The others huddle together for protection.

The ghosts find this beautiful world very uncomfortable. The grass doesn't bend beneath their feet, making walking very difficult and painful. Everything is too heavy for them. They do not have the strength to lift an apple that has fallen to the ground. The narrator fears that an insect could crush him if it landed on his head.

The solid people approach individual ghosts to encourage them to stay and travel to the mountains with them. They advise the ghosts to stick it out, that they'll get acclimated to this new world and eventually grow solid themselves if they'll give up their petty problems. The narrator overhears many such conversations, but the ghosts, one by one, give up and return to the bus.

After the narrator finally understands what his guide has been teaching him, the scene changes, and he sees a great assembly of gigantic forms standing around a silver table and looking at it. On the table are little tiny figures, like chessmen, moving to and fro. The narrator asks McDonald which of the two visions is the truth, and McDonald answers that it's all been just a dream. The dream fades, and the narrator wakens to WWII sirens blaring outside.

More summaries and resources for teaching or studying The Great Divorce.