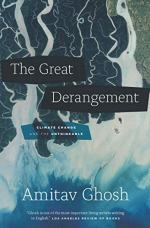 Amitav Ghosh
This Study Guide consists of approximately 45 pages of chapter summaries, quotes, character analysis, themes, and more - everything you need to sharpen your knowledge of The Great Derangement.

The Great Derangement: Climate Change and the Unthinkable Summary & Study Guide includes comprehensive information and analysis to help you understand the book. This study guide contains the following sections:

This detailed literature summary also contains Topics for Discussion on The Great Derangement: Climate Change and the Unthinkable by Amitav Ghosh.

The following version of this book was used to create this study guide: Ghosh, Amitav. The Great Derangement. Chicago: The University of Chicago Press, 2016.

The Great Derangement is a nonfiction work by Indian author Amitav Ghosh. In Part I, “Stories,” Ghosh introduces a central question: Why are there so few references to climate change in contemporary fiction? Books that do contend with this subject are often relegated to the margins in genres like science fiction. Ghosh believes that the failure of contemporary authors to address climate change has hindered the collective imagination of humankind from understanding its scope. In answer to his question, Ghosh suggests that the modernist predispositions toward realism and individualism make addressing climate change in the novel much more difficult. The realist tradition generally eschews the sort of dramatic, large-scale events that define climate change, such as weather-related disasters. When one encounters such an event in a novel, it often reads as implausible, despite the fact that such disasters are becoming more common year by year. Individualism involves a focus on the individual person and their character development over collectivism—there is no broad concern about the issues facing humankind as a whole. Climate change is one such issue. Ghosh also believes that people have a difficult time grasping the idea of nonhuman consciousnesses. He writes of the Sundarbans, a forested area in the Bay of Bengal populated by tigers. The residents there are particularly attuned to nonhuman consciousnesses because they are constantly scanning their environment for the presence of predators.

The author goes on to explore how India and the surrounding area are particularly vulnerable to climate change-related disasters, Mumbai especially. The city is located on the water and has a population of 19-20 million residents. In 2005, Mumbai was struck by a major rainstorm that resulted in substantial flooding and the deaths of over 500 people. After this incident, city officials did not craft a contingency plan for the city's evacuation, should disaster strike again. Ghosh believes this is because such a plan would have caused property values on the coast to decline. In other words, ordinary people and government leaders alike turn a blind eye to climate change and its potential repercussions.

In Part II, “History,” Ghosh begins by establishing that Asia has played a significant role in the history of climate change and will continue to play an important role because many Asian countries are particularly vulnerable to climate disasters (because of geography and population density). He explains that several Asian countries were adversely affected by British imperialism in the 19th and 20th centuries. In Burma (Myanmar), the British annexed an oil reserve located in Yenangyaung, while in India, a burgeoning shipping industry was quashed when the British passed legislation limiting the number of ships permitted to dock in England's ports. Both of these countries' economies were paralyzed as a result and their paths to industrialization curtailed. Ghosh believes that the slower industrialization processes in many Asian countries actually “delayed the onset of the climate crisis” (110).

In Part III, “Politics,” Ghosh contends that the way climate change is approached politically, both by ordinary citizens and world leaders, has resulted in stasis. In many Anglosphere countries (Great Britain, the United States, Canada, Australia, and New Zealand), climate change is viewed as a “moral issue” (132). This leads to polarization, as some people disbelieve climate science altogether, while others believe strongly in impending disaster and speak out vociferously in favor of change. However, the military and intelligence communities in these countries believe firmly in the science and work toward potential solutions—but only with regard to maintaining their positions of power. Ghosh declares the work of these organizations the “politics of the armed lifeboat” (143), explaining that the solutions are centered around ensuring dominance and keeping potential climate refugees out of the country. In contrast, India and other countries in the global south pursue the “politics of attrition” (147), believing that if they do nothing, the Anglosphere countries will eventually offer greater concessions on the global issue of climate change, because these countries will struggle more with any potential deprivations that result.

In closing, Ghosh compares and contrasts the 2015 Paris Agreement, the document that emerged from a meeting of world leaders from 196 countries, with Pope Francis' climate change encyclical of that same year, Laudato si'. Ghosh believes that the Paris Agreement was largely ineffectual, and that its language expresses an obvious deference to oil companies and others with a stake in maintaining the status quo. The encyclical, on the other hand, was a genuine plea for change, asking Christians of the world to remember their duty to protect the Earth and care for the impoverished. Ghosh believes that a concerted effort by leaders of major religions all over the world, working together with climate activist organizations, could result in meaningful progress.

More summaries and resources for teaching or studying The Great Derangement: Climate Change and the Unthinkable.

The Great Derangement: Climate Change and the Unthinkable from BookRags. (c)2022 BookRags, Inc. All rights reserved.