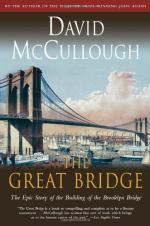 David McCullough
This Study Guide consists of approximately 76 pages of chapter summaries, quotes, character analysis, themes, and more - everything you need to sharpen your knowledge of The Great Bridge.

John A. Roebling's first real bridge and great showpiece, one of the handsomest bridges in America, is completed in 1860, 11 years after his first aqueduct project in Pittsburgh. PA. The opportunity comes, when much of the city burns to the ground. His son, Washington, just graduated from college, assists on the 1,030 feet long structure, consisting of four spans supported by four cables hung from six highly ornamental iron towers decorated and braced by latticework and topped by spires. The cables are "spun" in place, unlike Roebling's previous endeavors, the technique he proposes for the Great Bridge. The Allegheny River Bridge is the first stop on the Bridge Tour.

The New York Bridge Company is a private company, chartered by the New York Assembly in 1867. It calls for spanning the East River by 1879, and operating it thereafter. The cities have no say in...