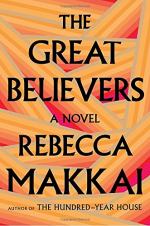 Rebecca Makkai
This Study Guide consists of approximately 42 pages of chapter summaries, quotes, character analysis, themes, and more - everything you need to sharpen your knowledge of The Great Believers.

This detailed literature summary also contains Quotes and a Free Quiz on The Great Believers by Rebecca Makkai.

The following version of the book was used to create this study guide: Makkai, Rebecca. The Great Believers. Viking, 2018.

The Great Believers by Rebecca Makkai is a novel dealing with the 1980s AIDS crisis in Chicago. The novel’s chapters alternate between two characters: Yale Tishman, a gay man working in the arts industry in 1980s Chicago, and Fiona Marcus, a friend of Yale’s who travels to Paris in 2015 in order to reconnect with her estranged daughter. These chapters are narrated in the third-person limited perspective and switch between 2015, on the one hand, and 1985-1986 on the other.

The Great Believers opens with a scene of Nico’s funeral. The year is 1985. Nico, one of Yale’s friends, has died of AIDS though his family refuses to admit this fact. Fiona, Nico’s sister, is there. They throw a house party in his honor. While Yale is lying down upstairs, the group goes to Nico’s apartment. While he and Yale are separated, Charlie Keene--Yale’s boyfriend--sleeps with Julian Ames, an actor and friend in the group. From this interaction, Charlie contracts HIV, though this is not revealed until later in the novel.

In 2015, Fiona has gone to Paris. On the plane she meets a handsome, younger man named Jake Austen. Jake and Fiona eventually sleep together. Fiona is staying at the house of a friend--the well-known photographer and artist named Richard Campo--while she looks for her daughter, Claire. After hiring a private investigator, Fiona eventually locates her daughter. Claire has had a child with her ex-boyfriend, after running off with him while in college. This man, Kurt, also lives in Paris though he and Claire are no longer together.

Back in 1985, more of Yale and Fiona’s friends continue to die. Nico’s boyfriend, Terrence, passes away in the hospital from AIDS. After Nico’s great-aunt, Nora Lerner, donates a number of 1920s artworks to Northwestern University, Yale works on authenticating these pieces and establishing a permanent collection at the university. Yale stops speaking with Charlie after he learns that Charlie cheated on him. He gets tested for the virus, and tests negative. In 2015, Nora continues trying to force her way into her daughter’s life while dealing with the trauma and pain of her brother Nico’s death.

Over time, Yale goes to Nora’s house in Wisconsin, which he visits with his intern, a closeted gay man named Roman. Yale and Roman sleep together several times, though Yale takes care to use protection when having sex with Roman. Yale, believing that Roman is a virgin, does not make Roman use protection. When Yale learns that Roman has had sex with multiple men before--always without protection--Yale panics and gets tested again. He tests positive.

The novel ends with scenes recounting Yale’s death in the hospital in 1992, while Fiona, elsewhere in the hospital, gives birth to Claire. Fiona in 2015 discovers that Julian Ames is still alive. She confesses that she prevented Yale’s mother, who never supported her son after he came out, from seeing him in the hospital. The novel ends with Fiona, at Richard’s art show in 2015, watching a video installation of Nico, Charlie, Yale and the other men walking in the street.

More summaries and resources for teaching or studying The Great Believers.