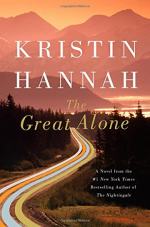 Kristin Hannah
This Study Guide consists of approximately 134 pages of chapter summaries, quotes, character analysis, themes, and more - everything you need to sharpen your knowledge of The Great Alone.

This detailed literature summary also contains Quotes and a Free Quiz on The Great Alone by Kristin Hannah.

In 1974, 13-year-old Leni tiptoes around her moody father, Ernt, a veteran who returned scarred and traumatized from Vietnam. When Ernt loses his latest job, he decides to move the family from Seattle to a property in Alaska that he inherited from his war friend Bo Harlan. His wife Cora worries about money, and she goes to her wealthy, estranged parents for help. Leni’s grandmother begs them to stay safely in Seattle, but Cora accepts only monetary aid. In the tiny town of Kaneq, the Allbrights meet local merchant Large Marge. She assures Cora and Leni that the community will support them. Their homestead is decaying and overgrown, but the local women help. Ernt fits right in with the survivalist patriarch of the Harlan clan, Mad Earl. Earl’s daughter Thelma again offers Cora the support of the community.

When Leni starts school, she meets Matthew Walker, the only child her age in Kaneq. He and Leni bond over books. That night, the Allbrights go to a barbecue at the Walkers’. Just as Leni feared, her father gets drunk. Cora flirts with Matthew’s father, Tom, and Ernt and Mad Earl angrily criticize Tom for his wealth and influence. Despite Ernt’s jealousy, Leni and Matthew promise eternal friendship. They become good friends.

Leni worries about Ernt and Cora ignores her, even when the autumn finds him increasingly drunk and angry. He leads the Harlans and Allbrights in weapons training so they will be ready to defend themselves. In November, Ernt’s nightmares get worse. He wakes Leni to test her survival skills. One dawn, he forces Leni to shoot her first rabbit and eat the heart. Matthew witnesses his mother Geneva die when she falls through a frozen river. The stunned town gathers for a funeral celebration at the saloon. Leni tries to comfort Matthew, who weeps in her arms. Ernt is jealous of Tom, and that night he hits Cora’s head on the wall, though he later cries and apologizes. Leni worries about Matthew and her parents’ toxic love. When Leni next has a chance to see Matthew, he shoves her away, apologizing in horror and grief afterward. He leaves for Fairbanks, where he stays with his maternal family and sees a psychologist.

In late January, Ernt stays out drinking all night and wolves devour the livestock. Leni and Cora walk into Kaneq to find him, but Tom humiliates Ernt by reprimanding him in public. Ernt beats Cora badly, and Leni finally convinces her to leave. They try to drive away in a blizzard and crash. Cora’s arm is badly broken and Leni crawls to the Walker property for help. Tom and Large Marge take Cora to a hospital, but she refuses to leave Ernt again. They force Ernt to take a pipeline job that will keep him away every winter, and while he is gone Large Marge moves in.

This plan works for four years, when Ernt is fired from the pipeline for drinking. He resumes his feud with Tom, confronting him publicly when Tom announces a plan to update the town. Ernt thinks the Harlans will support him, but Tom offers them well-paying construction jobs. That night, Ernt vandalizes the saloon. Leni worries he will eventually succeed in dividing the town, but the adults do not listen.

That summer, Matthew returns to Kaneq to face his memories. He and Leni rekindle their friendship, but they share a new physical attraction endangered by Ernt’s hatred for the Walkers. Leni convinces Matthew to keep the friendship secret, and all the adults warn them to be careful. Meanwhile, Mad Earl refuses Ernt’s latest plan for homemade landmines, enraging Ernt. Matthew kisses Leni and asks her to go to college with him. When Ernt sees them together, he beats Cora, but Leni and Matthew continue to see each other.

Mad Earl dies of a heart attack and Thelma refuses to give him leadership of the Harlan clan. He decides to cut his family off from the world by building a wall. Large Marge offers escape before it is too late, but Cora refuses. Leni, however, learns of her university acceptance and plans to go. She must stay away from Matthew for the summer, but when Ernt and Cora go on a trip to town one day in late August, she gives in to temptation. She and Matthew have a picnic, kiss in the rain, and make love in her loft. They wake up to Ernt and Cora’s return. Cora helps Leni distract Ernt while Matthew sneaks away. A week later, Ernt finishes the wall and locks the gate.

Leni tries to scream for help on a rare visit to town. Ernt drags the women home and starts to beat Cora, but Matthew has followed, and he defends her. Cora promises to go to Large Marge for protection if Matthew hides Leni. Matthew and Leni camp the night on Bear Claw Ridge, where they reaffirm their love. In the morning, a storm hits, and Leni falls over the ridge. Matthew tries to climb down for her but falls even harder. He loses consciousness, and Leni keeps them alive until the rescue party finds them two days later.

Leni and Cora find Ernt waiting at home—he was released from jail because Cora did not press charges. Cora takes him back but Leni refuses to speak to him. She defers her college acceptance to wait for Matthew, whose brain damage is likely permanent. A pregnancy test comes back positive. Cora urges Leni to hide it, but she tells Ernt. He beats her with his belt, and Cora shoots him: “Not my Leni” (326). Leni insists they hide the body, and they sink it in a frozen lake. Large Marge covers for their escape. As they wait for the plane, Leni opens a birthday gift Matthew had intended for her: a photo of his homesteader grandparents and an article by his grandmother, “MY ALASKA.” In Seattle, Cora’s parents help procure false papers and hide them from the police. Leni gives birth to a son she names MJ, Matthew Junior.

Seven years later, Leni graduates from the University of Washington. Grandma, Grandpa, Cora, and Leni have built a family centered around the happy MJ, but Cora feels guilty for all those years with Ernt. She dies of lung cancer, declaring Leni “the great love of my life,” and leaves her a memory box, a signed confession, and two tickets to Alaska (392).

Leni and MJ fly to Alaska and go to the local police station. Police chief Curt Ward convinces Leni to admit the truth for her own peace of mind, but then arrests her. Leni calls Tom Walker to protect his grandson. Before Leni’s arraignment can begin, Large Marge bursts in to bully the judge and prosecutor; Tom has the governor phone, and Leni is released.

The Walker property is now a wilderness tourism lodge. In Geneva’s old cabin, Leni finds a wheelchair-bound Matthew surrounded by his paintings. She believes he does not recognize her, but he just has trouble thinking and speaking when he is stressed. With some confusion, they admit their love for each other. Matthew worries that his scars will scare his son, but a joyful MJ immediately calls him “Daddy” and starts to play. Leni returns to her family’s homestead. She tells Matthew she will consider rebuilding. All of Kaneq gathers to scatter Cora’s ashes on the bay, and Leni lays her memories to rest.

The novel closes with Leni’s “MY ALASKA” article, dated 2009. She is now a famous photographer, and she has two more children with her husband, Matthew. She looks back on their combined family histories and decides that though Alaska drives some mad, it is home for those who belong: “I belong” (438).

More summaries and resources for teaching or studying The Great Alone.